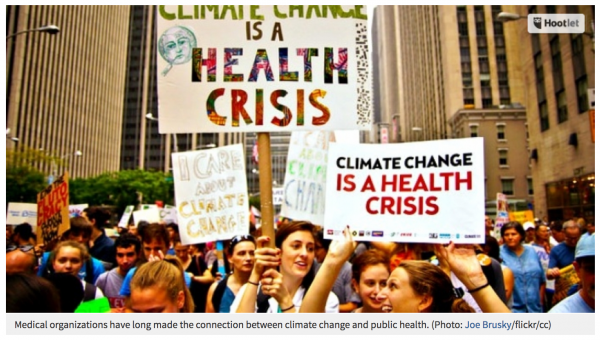 Today, more than 100 million Americans depend on healthcare safety-net programs: Medicare, Medicaid and the Affordable Care Act (ACA). But that safety net could be shredded if Dr. Tom Price—Trump’s nominee for Secretary of Health and Human Services—has his way. Dr. Price has already introduced plans to dismantle the ACA and roll back Medicaid, which would take health insurance coverage away from 22 million Americans, 14 million of whom are low income.

There are many reasons to oppose these plans, but one of the most important is also the most overlooked: climate change.

As physicians, we see our patients suffering as the planet warms. A 2014 survey by the National Medical Association found that a majority of African-American physicians—who often serve low-income communities and communities of color—report that their patients are already impacted by climate change. Those impacts include injury from severe weather, respiratory issues from heat-related ozone air pollution, longer and stronger allergy seasons, insect-borne diseases such as the Zika virus, and mental health problems associated with dislocation and property loss from extreme weather events.

Hispanics are especially likely to experience the negative health effects of climate change. Many of the country’s 56 million Hispanics live in coastal areas where sea-level rise and hurricane-driven floods threaten wellbeing through injury, property loss, and waterborne illness. Both African Americans and Hispanics are more likely to live in neighborhoods with higher air pollution levels, which are made worse by climate change. As a result, those communities endure higher rates of asthma, lung cancer and premature death.

The leading cause of weather-related death—heat stroke and heat exhaustion—is on the rise as climate change shatters heat records year after year. Increased heat also exacerbates illness in patients with preexisting heart and lung disease, necessitating more hospital admissions, more visits to the emergency room, and more premature death. The elderly are particularly vulnerable to illness from extreme heat, which leads to rising demand for rehabilitative and nursing home care. These health impacts are not confined to individuals; their harmful social and economic effects ripple outward to families and communities.

The health burdens of climate change are disproportionately borne by low-income communities and communities of color, the same groups that often depend on healthcare safety net programs. As those burdens grow, safety-net programs are more important than ever. Moreover, repealing the Affordable Care Act would wipe out the Prevention and Public Health fund, a critical support for communities to promote health, prevent illness and keep people out of the hospital.

As doctors, and as representatives of the African-American and Hispanic medical communities, we remain committed to healthcare as a human right. We will vigorously reject any legislation to repeal or dismantle the ACA, Medicare or Medicaid. We call on our fellow physicians, healthcare providers and patients to speak up as well, and to defend hard-fought access to quality healthcare for vulnerable elderly and low income people. We look forward to working with Dr. Price, as the HHS nominee, to keep Medicare, Medicaid, and ACA strong to protect the health of the most vulnerable. With increasing health hazards from climate change, we need these services now more than ever.

This work is licensed under a Creative Commons Attribution-Share Alike 3.0 License