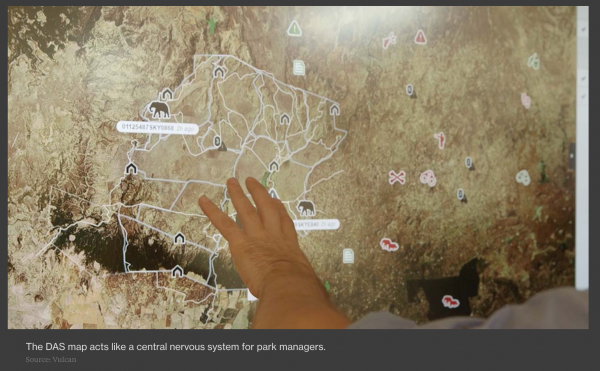 If he has his way, Paul Allen will cover 90,000 square miles of African territory with smart sensors and drones by the end of this year to bring hyper-connectivity to Africa’s most remote, wildlife-packed corners. It’s the biggest, tech-focused conservation project to date, a command-and-control system for rangers to record and respond to poaching threats from Kenya to Tanzania.

Named the Domain Awareness System (DAS), Allen is funding the project through his company Vulcan, and it’s as simple in concept as it is complex in execution. It’s not sexy—this is software, after all—and yet it’s the likely key to one of sexiest philanthropic causes of our time.

The basic idea: studying endangered animals’ movements in order to get ahead of poachers on a scale that allows Big Data to predict threats across entire regions.

For years, local rangers have protected wildlife with boots on the ground and sheer determination. Armed guards spend days and nights surrounding elephant herds and horned rhinos, while on the lookout for rogue trespassers.

Allen’s DAS uses technology to go the distance that humans cannot. It relies on three funnels of information: ranger radios, animal tracker tags, and a variety of environmental sensors such as camera traps and satellites. This being the product of the world’s 10th-richest software developer, it sends everything back to a centralized computer system, which projects specific threats onto a map of the monitored region, displayed on large screens in a closed circuit-like security room.

For instance, if a poacher were to break through a geofence sensor set up by a ranger in a highly-trafficked corridor, an icon of a rifle would flag the threat as well as any micro-chipped elephants and radio-carrying rangers in the vicinity.

Think of DAS as similar to a comprehensive camera system in Vegas casinos, with park managers replacing pit bosses on the hunt for cheats and camo-sporting rangers in place of the security guards that flank blackjack tables. Except in this case, when alerts strike, managers aren’t preventing the hemorrhage of a couple hundred thousand dollars; they’re dispatching help to save one of 352,271 estimated remaining elephants, or one of 30,000 surviving rhinoceroses.

“By nature, I am attracted to tough problems—problems that, by definition, require innovative and dramatic solutions,” said Allen from his office in Seattle, where his philanthropic company, Vulcan Inc., is based. “[The DAS project] is the ideal combination of two of my interests—technology and the preservation of [the savannah elephant,] one of Africa’s most iconic species.”

DAS was first put into the wild in October 2016, when Ted Schmitt, lead program manager at Vulcan, and his team deployed the technology at the Lewa Conservancy, a 55,000-acre preserve in Kenya. Then it was brought to Odzala National Park, founded in 1935 and one of Africa’s oldest national parks in the Republic of Congo. Six other African conservation sites in partnership with Save the Elephants, African Parks Network, and Wildlife Conservation Society soon followed.

But its most high-profile partner is Singita, the network of standard-setting luxury safari lodges run by conservation guru Luke Bailes. If DAS is the un-sexiest player in this space, Singita is the very sexiest—it has 12 properties spread across Tanzania, Zimbabwe, and South Africa—and the lodges have the most sumptuous design, the largest wine collection, and often the highest price tag among its competitive set.

DAS was installed at the five-lodge Singita Grumeti reserve in March, using sensors to illuminate a key corridor for poachers intent on crossing to the neighboring Serengeti. Bailes calls the system a “revelation and a game-changer.” He said the “layered approach of technology and boots on the ground enables Singita Grumeti to significantly enhance its effectiveness in dealing with poaching.”

Part of the success is Vulcan’s holistic approach: Schmitt’s team developed the software and provided capital for equipment and  hardware, and they’ve also invested in training, technical input, support, setup, mentoring, and guidance. Though the partnership is just two months old, “the impact has been significant,” Bailes said.