As the standards for environmentally friendly construction rise, a Brooklyn developer has a new goal: renovate an apartment building so it generates as much energy as it uses.

When the developer, Voltaic Solaire, finishes a $1 million rehabilitation of a 19th-century brownstone at 367 Fifth Avenue in Park Slope next year, the facade will be covered with a solar skin and a solar awning will sit on the roof. The panels will generate 18,000 kilowatt hours of energy throughout the year, enough to power all six units in the 7,000-square-foot building. Voltaic Solaire is so confident in its ability to create a “net-zero” building that utilities will be bundled into the rent. 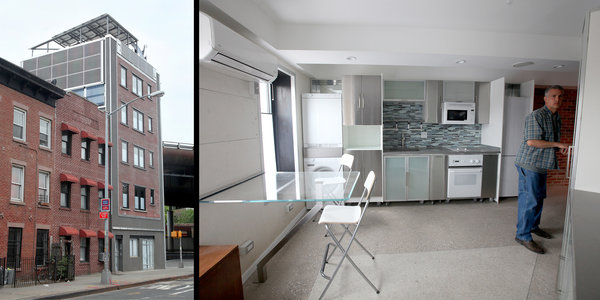 As a demonstration, Voltaic has nearly completed a five-story showroom in Carroll Gardens — a triangular building called the Delta, on the corner of Hamilton Avenue and Ninth Street. Even without a southern exposure, the solar system generates enough energy to power the 2,700-square-foot property.

“If we can obtain sustainability at this location, it can be obtained anywhere,” Ronald F. Faia, the chief financial officer of Voltaic Solaire, said of the Delta’s poor light and odd configuration.

Each of the five floors at the Delta has a mere 450 square feet of space, and is equipped with Murphy beds and collapsible tables. A studio and a triplex will eventually be turned into a bed-and-breakfast.

Solar panels alone cannot generate enough energy to reduce a building’s usage to zero. So to achieve the net-zero goal at the Park Slope property, the developers installed LED lighting, insulated pipes and energy-efficient windows and appliances. They will add foam barriers at the walls, the foundation and the facade to prevent air from escaping. The Delta, using the same techniques, was built from the ground up. “The system will work, but you need the whole package,” Mr. Faia said. “You need the energy conservation and you need the right windows.”

On cloudy days, the buildings will draw energy from the grid. But Mr. Faia expects the panels will generate enough energy annually to cancel that out. Solar thermal panels will heat the water.

The Park Slope project may be the first city multifamily to be energy-neutral, although the city does not track the data. “You don’t have a lot of contractors with experience in super-low-energy housing,” said Russell Unger, the executive director of the Urban Green Council, an affiliate of the Green Building Council. “People understand insulation, but they don’t understand air sealing.”