Fires Changing What We Breath and Our Health 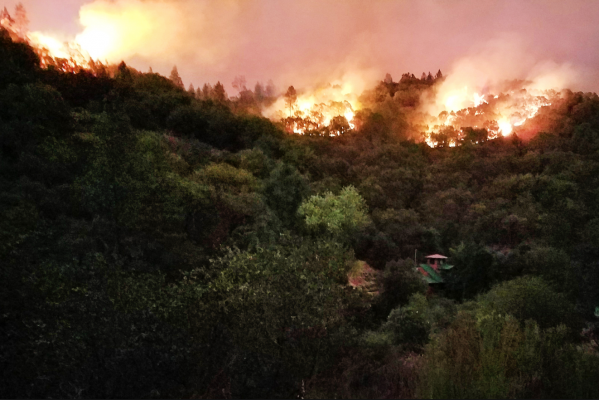 SANTA ROSA, Calif. — As the deadliest fires in California history swept through leafy neighborhoods here, Kathleen Sarmento fled her home in the dark, drove to an evacuation center and began setting up a medical triage unit. Patients with burns and other severe injuries were dispatched to hospitals. She set about treating many people whose symptoms resulted from exposure to polluted air and heavy smoke.

“People were coming in with headaches. I had one. My eyes were burning,” said Sarmento, the director of nursing at Santa Rosa Community Health, which provides health care for those who cannot afford it. But respiratory problems — coughs and shortness of breath — were among the biggest risks. “We made sure everyone had a mask.”

More than half of the evacuees at the shelter that October night were elderly, some from nursing homes who needed oxygen 24/7. Sarmento scrambled to find regulators for oxygen tanks that were otherwise useless. It was a chaotic night — but what came to worry her most were the weeks and months ahead.

“It looked like it was snowing for days,” Sarmento said of the falling ash. “People really need to take the smoke seriously. You’ve got cars exploding, tires burning. There has to be some long-term effect” on people’s health.

From Puget Sound to Disneyland and east over the Rockies, Americans have coughed and wheezed, rushed to emergency rooms and shut themselves indoors this year as pollution from wildfires darkened skies and rained soot across the landscape. Even to healthy people, it can make breathing a miserable, chest-heaving experience. To the elderly, the young and the frail, the pollution can be disabling or deadly.

Even though the nation has greatly improved air quality over the last 40 years through environmental regulations and technological improvements, the increasing frequency of large wildfires now undermines that progress, releasing copious pollutants that spread far and wide through the air and linger long after the fires are extinguished.

Scientists say climate change, degraded ecosystems and the fickleness of the weather have been amplifying fires in forests, grasslands and neighborhoods throughout the West. Nine times more western forestland is burning in large fires each year on average now than 30 years ago, according to calculations by two leading scientists.

The blazes create smoke waves — pulses of pollution containing everything from charred plastic residue to soot to other small particles that lodge deep in the lungs. They can trigger short-term ailments, such as coughing; worsen chronic diseases, such as asthma; and lead to long-term damage, including cancer.

The effect of the fires in Northern California’s wine country, which destroyed thousands of homes and killed 43 people, went well beyond the burn zone. The smoke choked the San Francisco Bay Area, home to 7 million people in nine counties, for days.

Colette Hatch, 75, of Santa Rosa, who suffers from lung disease and uses a nebulizer daily, evacuated to her daughter’s home in Sunnyvale, in Silicon Valley, when the fires came. But even nearly 100 miles away, Hatch said she struggled to breathe, coughing so hard she couldn’t sleep.

Wafting beyond Oakland and Livermore in the East Bay, the smoke headed into California’s agricultural heartland, the Sacramento and San Joaquin valleys.

Known collectively as the Central Valley, it stretches for hundreds of miles roughly north to south, bracketed by mountain ranges that trap some of the dirtiest air in America. Increasingly, wildfires like the ones in Northern California’s wine country funnel smoke into the chute, significantly raising the pollution levels in places as far away as Fresno.

Climate Central, a research and journalism nonprofit, examined air district data from California’s Sacramento and San Joaquin valleys. The analysis showed that while the number of heavily polluted days is falling overall each year on average — those days are occurring more frequently during the peak fire season. The researchers say wildfire smoke is to blame.

With large wildfires on the rise, smoke and the attendant breathing ailments seemed everywhere this year. In September, smoke from fires burning in California, the Pacific Northwest and Montana pushed as far east as Pennsylvania. Smoke triggered emergency declarations in Washington state and California. The Evergreen State was experiencing few fires of its own in July when it was hit by smoke waves that poured across the Canadian border. And smoke returned to much of the northwest in August and September as fires broke out in the Cascades and the Columbia Gorge.

“I remember waking up one morning and the sky was orangey-red and there was ash falling out of the sky,” said Jeremy Hess, a researcher and physician at the University of Washington in Seattle. “This summer was very busy for us in the emergency department and we were often over capacity. If it wasn’t the smoke, it was the heat,” Hess said.

The blazes came after record-breaking late summer heat dried out grass that had flourished following record-breaking winter rains — both forms of extreme weather that are worsened by global warming. In addition, a high pressure system over the Pacific fanned the flames by driving unusually hot and powerful seasonal winds into Northern California from the dry highlands of Nevada.

The immediate precipitant may have been sparks from power lines, although investigations into the causes are ongoing. But a changing climate helped fuel the blazes.

“Climate change was not the cause but it’s definitely an ingredient,” said Park Williams, a climate and ecology researcher at Columbia University’s Lamont-Doherty Earth Observatory. And that means worse is to come.

Williams said there was a clear connection between the nearly 2 degrees Fahrenheit overall increase in global temperature since the late 1800s and the severity of these and other fires. (Warming in the West has been outpacing the global average in recent decades because of natural cycles.)

“Fire really responds strongly to even that small of a change of temperature,” said Williams, whose assessment of global warming’s role in the wine country fires is shared by other experts.

Environmentally, the fires are a double whammy: They destroy trees that help to slow global warming by absorbing heat-trapping carbon dioxide as they grow. They also release carbon dioxide stored within, as well as black carbon that melts snow and ice.

Research indicated in 2015 that large fires had helped turn California’s forests and other lands into polluters, releasing more carbon to the atmosphere than they suck back in. The state’s wildlands released more heat-trapping pollution from 2001 through 2010 than Vermont’s entire economy. Rising temperatures aren’t the only cause — the forests are overloaded with fuel following more than a century of aggressive firefighting.

While public attention has tended to focus on other health risks from climate change such as heat stroke in summer and the spread of mosquito-borne diseases northward, the effects of smoke pollution have been gaining more attention following dramatic and widespread wildfires.

The most dangerous pollution from wildfires is fine soot — “really small particles that we know can get into the lungs,” said Colleen Reid, a geographer at the University of Colorado who researches climate change and human health. It’s known as PM2.5, meaning “particulate matter” that’s less than 2.5 microns wide, only visible using microscopes.

It can nestle into lung tissue and pass into the bloodstream, contributing to an array of health problems including infections and, potentially, heart attacks.