Posted by Wolf on Thursday, 31 May 2012 in General Environment 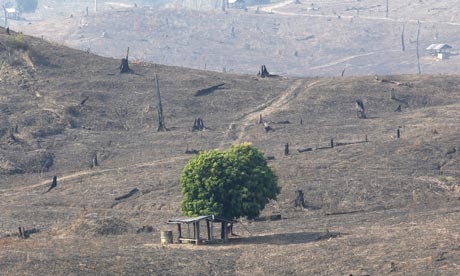 The 1992 Rio Earth summit established "sustainable development" firmly in the global political lexicon – even though the term meant, and continues to mean, different things to different people. For Stephan Schmidheiny, a CEO who was appointed chief adviser for business and industry at the summit and subsequently set up the World Business Council on Sustainable Development, it apparently means continuing with business as usual: in February, he was sentenced to 16 years in prison for the deaths of thousands of workers at his asbestos-cement factory.

As the Rio+20 anniversary conference approaches, a battle rages over the definition of another term: "green economy". "A green economy in the context of sustainable development and poverty eradication" is a key conference theme. It sounds good, but what does it mean?

According to one of the official preparatory documents (pdf): "Several delegations proposed the valuing of ecosystem services and internalising of environmental externalities as key elements of a green economy, as well as green accounting (pdf); while some delegations cautioned against further marketisation of nature's services."

The jargon masks some diametrically opposing views. On one side, many northern governments are saying we trash the natural world because we don't value it properly. So far, so good. But they go on to confuse "value" with "price", which is where it all starts to break down. They argue that to conserve or protect the resources and functions we need from nature, we need to ascribe a financial value to them and bring them into the market. Then we will pay the proper price for nature and stop destroying it.

The UK government is a big advocate of this approach, having bought heavily into the recommendations of a report on the subject by a team led by the former Deutsche Bank employee Pavan Sukhdev. It has gone as far as publishing a white paper that commits to pushing the agenda, both in the UK and on the international stage.

A market-based approach to dealing with natural resources is not an entirely new concept. The idea behind the UN's Reducing Emissions from Deforestation and Forest Degradation programme (Redd), for example, is that if the carbon stored in forests is valued and quantified, forests will be seen as more valuable standing than they would be cut down.