Posted by GPSO on Friday, 22 December 2017 in Environmental Heroes 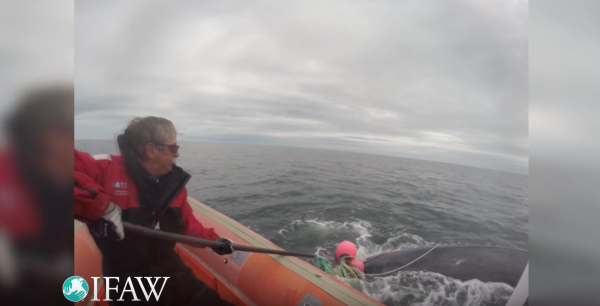 Joe Howlett was no stranger to the risky work of rescuing whales.

More than 15 years ago, the Canadian lobster fisherman co-founded the Campobello Whale Rescue Team, an “intrepid group of fishermen who care so much about whales that they are willing to risk their lives to save them.”

From their base on Campobello Island, just across the border from Maine, the group’s volunteer members would respond to dozens of reports of whales entangled in fishing gear off the coast of New Brunswick. Although the giant marine animals could be unpredictable when trapped, for Howlett, setting a whale free was worth the painstaking, dangerous work, friends said.

“This is something he loved and there’s no better feeling than getting a whale untangled,” Mackie Greene, the captain of the whale rescue group, told the Canadian Press.

However, tragedy struck Monday when Howlett was killed in an operation to free a trapped North Atlantic right whale off the coast of New Brunswick, according to a statement by Fisheries and Oceans Canada. He had been on a “fast response vessel” belonging to the Canadian agency at the time of the incident with several others, the department said.

“We have lost an irreplaceable member of the whale rescue community,” Dominic LeBlanc, minister of Fisheries and Oceans Canada, said in a statement. “His expertise and dedication will be greatly missed.”

Though the department did not detail how Howlett was killed, LeBlanc noted that “there are serious risks involved with any disentanglement attempt” and praised those who responded to the emergency for their bravery and passion for marine mammals.

Greene, who was not on the boat during the incident, told the Canadian Press that the team had succeeded in freeing the whale Monday when it somehow struck Howlett.

“They got the whale totally disentangled and then some kind of freak thing happened and the whale made a big flip,” Green said. “Joe definitely would not want us to stop because of this.”

Jerry Conway, an adviser with the whale-rescue group, told Canadian Broadcasting Corp. News that rescue boats usually retreat as soon as a whale is freed.

“You’re dealing with a 70-ton whale that’s very upset,” he told the news site, adding that this whale “responded in a way that ultimately killed Joe.” 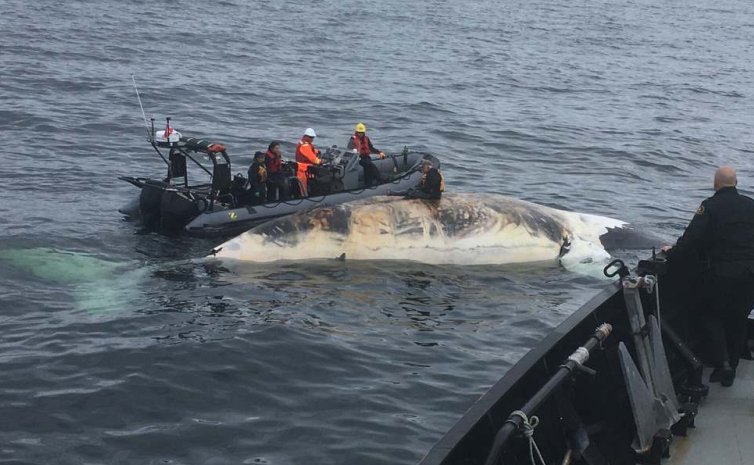 The North Atlantic right whale is protected as an endangered species in Canada and the United States. There are only about 500 of the animals left in the world, according to Fisheries and Oceans Canada. North Atlantic right whales can live at least 75 years and grow up to 59 feet long, and migrate between the coasts of Florida and Georgia in winter and Atlantic Canadian waters — especially the Bay of Fundy and southwestern Nova Scotia — in the summer.

So far this summer, seven North Atlantic right whales have been found dead in the Gulf of St. Lawrence near New Brunswick and Prince Edward Island, alarming conservationists.

“This situation is very concerning,” Fisheries and Oceans Canada said in a statement June 24, after a fifth whale carcass sighting had been confirmed in the Gulf of St. Lawrence. “The cause of death is unknown at this time and DFO is committed to finding out what happened to these animals and to protecting this species.”

The department, along with the Canadian Coast Guard and other research groups, has gathered samples from the dead whale carcasses and towed some of them to shore to conduct necropsies. The largest threats to the species have been collisions with boats, getting tangled in fishing gear and underwater noise, according to the department.

Despite the mysterious whale deaths, the department had recently cheered the successful rescue of a North Atlantic right whale July 5. Howlett had been part of that operation.

The International Fund for Animal Welfare, which funds the Campobello Whale Rescue Team, mourned Howlett as “a true friend of the animals” who had dedicated countless hours to rescuing whales in the Bay of Fundy and eastern Canada. The group posted YouTube footage of Howlett on a five-hour whale rescue operation from last summer, showing Howlett aboard an orange zodiac boat, being tossed about as he worked with a long pole to free a 6-year-old endangered whale from netting.

The New England Aquarium in Boston also mourned Howlett’s loss, describing him as “one of the few certified whale disentanglement experts in Canada.”

“His skills as a mariner were surpassed only by the enduring friendships he developed with the researchers who worked with him,” the organization said in a statement. “Joe’s big heart, affable nature and undeniable love of the sea allowed him to work comfortably in both the fishing and scientific worlds.”

“He did it for years, he was good at it and had a lot of successes,” Campobello Island Mayor Stephen Smart told Canadian Broadcasting Corp. News of Howlett. “I’m sure for him, I’m sure it was just another day at work.”

Smart added that Howlett’s death was a “big blow” to the tiny community.

“There’s only 850 people here on Campobello Island now and Joe was a very lively character, he had a great sense of humor,” Smart told the news site. “Everybody knew Joe Howlett and everybody respected Joe Howlett.”