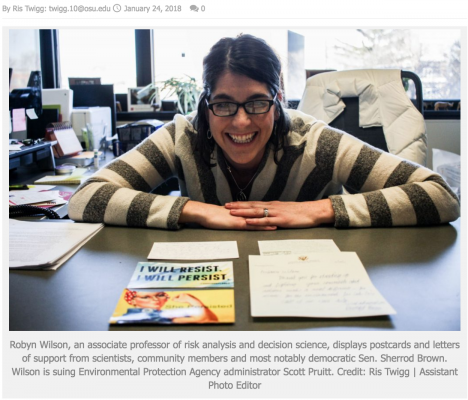 Ohio State professor Robyn Wilson is standing up to the Environmental Protection Agency after she was emailed a message implicitly asking for her resignation from the Science Advisory Board – an act she said is specifically targeting scientists at academic institutions.

In November, Wilson refused to resign and has not received a response from the agency since.

Wilson, alongside current and former advisory board members, is suing the EPA in an attempt to overturn administrator Scott Pruitt’s directive that bans scientists who receive their funding from serving on any of the agency’s advisory boards.

In a press conference Wednesday, Wilson said this move directly impacts researchers at universities, because they typically receive grants from the EPA. This puts the researchers in a sticky situation, since the grants could be tied to other scientists who are dependent on the money, a situation Wilson experienced first-hand.

Wilson, an associate professor of risk analysis and decision science, said she is in the midst of conducting research with several partners, and if she agreed to stop the EPA-funded work to continue her role on the board, the others would be left in the dark.

Pruitt’s directive is said to have been developed to create a more diverse board and avoid any conflicts of interest.

Wilson said the agency is inferring “that in some way, because the EPA was funding your research that you then wouldn’t be able to be objective, that you would then spin your data or spin your science in ways that would serve a particular mission at the agency.”

“That brings into question a bit what the intentions are behind this,” she said. “There’s obviously maybe another intention behind it because it’s duplicating, in my opinion, [preventive] processes already in place.”

She said the directive removes board members from institutions to make way for industry researchers who might agree with the current administration’s views on environmental issues like climate change.

According to a report from the Center for Investigative Reporting, 68 percent of the new Science Advisory Board consists of industry-funded scientists, 14 of which contributed nearly $320,000 to Pruitt’s Oklahoma state Senate campaign.

Many critics of Pruitt’s directive have said it is an effort to remove unbiased science from the EPA and increase the influence of industries regulated by the agency in its decision-making. The EPA does not comment on pending litigation.

“It appears to be a sort of purge [of independent scientists],” Wilson’s lawyer, Michael Burger said. “And there does seem to be a part of this which does also seem to be primarily about a form of cronyism that seems angled towards helping Pruitt in furthering his political ambitions.”

Wilson joined the lawsuit in hopes that other scientists with expertise relevant to the science behind the agency’s decision-making process won’t be excluded from serving as advisers.

“I think it’s a blatant attack on science-informed policy,” Wilson said. “They can have a board who’s friendly to deregulation and be willing to say things about science that isn’t truthful.”

Burger acknowledged Pruitt has discretionary power to prevent individual candidates deemed too biased or partial from serving on committees, but said what is going on now is an abuse of that power.

“There is no basis for it,” Burger said. “I think there is a very strong case to be made that it is in violation of a number of laws and Office of Governmental Ethics regulation.”

According to the U.S. Office of Governmental Ethics, scientists on advisory boards are allowed to engage in matters “where the disqualifying financial interest arises from his nonfederal employment … provided that the matter will not have a special or distinct effect on the employee or employer other than as part of a class.”

In Wilson’s case, the “disqualifying financial interest” is the EPA grant and her nonfederal employment is her Ohio State research funded by the grant.

But as a special government employee, she is exempt from being a conflict of interest so long as the grant has no special effect on her or the university.

As for the next steps in the lawsuit, Burger and Wilson are unsure of what will happen, especially since the EPA has remained silent on the issue.

Either the EPA will answer the complaint, Burger said, or it will file a motion to dismiss it.

Regardless, the EPA must file a record and provide the documents the agency relied on to issue the directive in the first place, he said.

Wilson said she contemplated filing a lawsuit for two months before making a final decision because she was afraid of retribution not for herself, but for her colleagues and the university.

If it really wanted to, she said the EPA could theoretically take away her and her collaborators’ grant funding or take away funding opportunities for the university.

It’s unlikely the agency would do that, Wilson said, because she believes the EPA would get “slammed” by negative reaction and protests, mainly because of the Ohio State’s reputation as a research institution.

If she were offered back her board position, she said she would accept it, adding the lawsuit more than likely will not be complete by the time her three-year term is supposed to end in September.

“Chances are, it’s not going to directly impact me in that way,” Wilson said. “But I hope for the sake of science that it could be overturned because I think it’s a pretty clear attack on a lot of really intelligent, decent individuals who are basically now being punished for having been the best people to answer the agency’s questions.”

Summer Cartwright contributed to this article