The Threat of Declining Bees 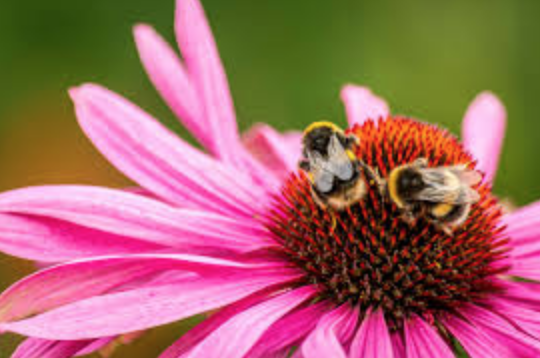 One of every three bites of food eaten worldwide depends on pollinators, especially bees, for a successful harvest. And in the past several months, a scramble in California’s almond groves has given the world a taste of what may lie in store for food production if the widespread — and still puzzling — decimation of bee colonies continues.

For much of the past 10 years, beekeepers, primarily in the United States and Europe, have been reporting annual hive losses of 30 percent or higher, substantially more than is considered normal or sustainable. But this winter, many U.S. beekeepers experienced losses of 40 to 50 percent or more, just as commercial bee operations prepared to transport their hives for the country’s largest pollinator event: the fertilizing of California’s almond trees.   Spread across 800,000 acres, California’s almond orchards typically require 1.6 million domesticated bee colonies to pollinate the flowering trees and produce what has become the state’s largest overseas agricultural export. But given the widespread bee losses to so-called “colony collapse disorder” this winter, California’s almond growers were able to pollinate their crop only through an intense, nationwide push to cobble together the necessary number of healthy bee colonies.

“Other crops don’t need as many bees as the California almond orchards do, so shortages are not yet apparent, but if trends continue, there will be,” said Tim Tucker, vice-president of the American Beekeeping Federation and owner of Tuckerbees Honey in Kansas, which lost 50 percent of its hives this past winter. “Current [bee] losses are not sustainable. The trend is down, as is the quality of bees. In the long run, if we don’t find some answers, and the vigor continues to decline, we could lose a lot of bees.”   The gravity of the situation was underscored on Monday, when the European Commission (EC) said it intended to impose a two-year ban on a class of pesticides known as neonicotinoids, now the world’s most widely used type of insecticide. Neonicotinoids are one of the leading suspected causes of colony collapse disorder, and the European Commission announced its controversial decision three months after the European Food Safety Agency concluded that the pesticides represented a “high acute risk” to honeybees and other pollinators.

The EC action will restrict the use of three major neonicitinoids on seeds and plants attractive to bees, as well as grains, beginning December 1. “I pledge to my utmost to ensure that our bees, which are so vital to our ecosystem and contribute over 22 billion Euros [$29 billion] annually to European agriculture, are protected,” said European Union Health Commissioner Tonio Borg.   The EC action comes as scientists and regulators have grown increasingly concerned about the impact of colony collapse disorder on the world’s food supply, given that the majority of the planet’s 100 most important food crops depend on insect pollination. A recent international study of 41 crop systems on six continents showed that healthy populations of wild bees are key to successful yields of crops ranging from pumpkins to grapefruit. Relying solely on domesticated honeybees could ultimately put those crops at risk, scientists say. Wild bees also have been declining in many places.

No one investigating the issue is suggesting that neonicotinoids are the sole cause of current bee declines. Tucker, other beekeepers, and entomologists say that the cause of colony collapse disorder is likely a combination of factors that includes the widespread use of pesticides and fungicides, as well as the spread of viral pathogens and parasitic mites in beehives. While mites and diseases have long been known to cause significant declines in domesticated bee populations, no single pathogen or parasite, say entomologists, appears to sufficiently explain the current rate of hive collapse.

A recent study that found unprecedented levels of agricultural pesticides — some at toxic levels — in honeybee colonies is prompting entomologists to look more closely at the role of neonicotinoids in current bee declines. Some studies have indicated that neonicotinoids can lead to a sharp decline in queen bees in colonies and can also interfere with the ability of bees to navigate back to their hives. James Frazier, a professor of entomology at Pennsylvania State University, said more research needs to be conducted into whether neonicotinoids, particularly in combination with other pesticides, may suppress the immune system of bees at “sub-lethal” levels, enabling diseases to take hold.

“This is uncharted territory,” said Purdue University associate professor of entomology Christian Krupke. “We’ve never done pest management like this before.”   While not downplaying neonicotinoids as a potential culprit, Eric Mussen, an apiculturiust at the University of California, Davis, noted that the case against these pesticides is not clear-cut. For example, honeybees are apparently doing fine in Australia, where neonicotinoids are widely used and varroa mites are not a problem. Neonicotinoid use is common in Canada, but colony collapse disorder is not significantly affecting hives there.

In the U.S., several national environmental advocacy organizations and commercial beekeepers filed suit in March against the U.S. Environmental Protection Agency (EPA) for its conditional registration of certain neonicotinoids, contending that the agency did not properly ensure environmental health protections, particularly with respect to pollinators.   The EPA is now reviewing its registration of neonicotinoids and has accelerated the review schedule due “to uncertainties about these pesticides and their potential effects on bees.” The agency said in an email that it is working with beekeepers, growers, pesticide manufacturers, and others to improve pesticide use, labeling, and management practices to protect bees and to thoroughly evaluate the effects of pesticides on honeybees and other pollinators. As part of these efforts, the EPA is working with pesticide and agricultural equipment manufacturers to reduce the release of neonicotinoid-contaminated dust during planting — a time when commercial bees are likely to encounter the insecticide.   In the U.S., neonicotinoids are currently used on about 95 percent of corn and canola crops; the majority of cotton, sorghum, and sugar beets; and about half of all soybeans. They’re also used on the vast majority of fruit and vegetable crops, including apples, cherries, peaches, oranges, berries, leafy greens, tomatoes, and potatoes. Neonicotinoids are also applied to cereal grains, rice, nuts, and wine grapes.

Honeybees are brought in to pollinate onion crops at a California farm.UNIVERSITY OF CALIFORNIA

Charles Benbrook, research professor at Washington State University’s Center for Sustaining Agriculture and Natural Resources, has estimated that neonicotinoids are used on approximately 75 percent of the acres devoted to these crops in the U.S. They are also widely used on landscaping plants and urban trees and in numerous home garden pest-control products — all in places frequented by bees, domesticated and wild.

“There is no place to go hide,” says New York beekeeper Jim Doan, a director of the American Beekeeping Federation. “The outlook is not good.”   When governments around the world registered and approved these insecticides for use in the 1990s, many questions about the environmental impacts of neonicotinoids were left unanswered. Neonicotinoids were welcomed as a safer alternative to previous generations of pesticides, particularly organochlorines (such as DDT) and organophosphates, which have known adverse environmental and human health effects. Neonicotinoids attack insects by harming their nervous systems and are considered of low toxicity to mammals. They are also typically used as systemic pesticides — meaning that they stay with the plant as it grows — and are applied as seed treatments, to roots, or into tree trunks, rather than applied with as a spray. This greatly reduces the potential for human exposure compared to other pesticides.

But because the insecticide stays with the plant as it grows, it raises questions about the potential for bees to be exposed through nectar, pollen, or leaf surface moisture, where a growing number of studies are finding evidence of neonicotinoids. Neonicotinoids are known to be toxic to bees, earthworms, and other terrestrial and aquatic invertebrates, as was noted in documents submitted to the EPA when they were registered.   “The motivation for producing neonicotinoids was reduced human toxicity, but the environmental and ecosystem impacts were not considered in enough detail to predict what’s going on,” says Frazier of Penn State.

“These compounds are a nightmare scenario for pollinators,” says one beekeeper.

“These compounds are a nightmare scenario for pollinators,” says Steve Ellis, a Minnesota-based beekeepeer whose bees primarily pollinate California almonds. “There is no way to prevent exposure to these chemicals. The only question is the exposure level, whether that is a problem or not. The pesticide industry claims not. The beekeeping industry says yes.”

Both Doan and Ellis have experienced dramatic losses of bees in recent years, including complete hive failures. Both say their bees and hives have tested positively for neonicotinoids. Yet in both cases the agricultural authorities and pesticide manufacturers who participated in testing the damaged hives said the insecticides’ presence was not conclusively linked to the bees’ deaths. Doan and Ellis are now part of the lawsuit filed against the EPA.   The pesticides’ manufacturers, among them Bayer CropScience and Syngenta, and their trade association, CropLife America, say that neonicotinoids are safe if used as directed. These compounds are biologically active for the limited periods of time when the products’ target insects are active, say their manufacturers, who point to independent tests showing that risks of adverse impacts to bees and “non-target” insects are minimal.

“We can use them safely and not endanger the health of bees,” says David Fischer environmental toxicologist with Bayer CropScience. “There is not a correlation with the use of these products and the loss of colonies. What tends to be publicized is not an accurate reflection of the weight of the evidence.”

CropLife America senior director of regulatory policy, Ray McAllister, says only a small quantity of pesticide is applied to the seed, precisely where its needed. He said the major effects are during the plant’s early growth stages and that as the plant grows, the pesticide’s active ingredient is diluted and breaks down. This, he explained, “reduces by orders of magnitude the amount present in the plant when it flowers. If the dose is extremely low it is not going to be toxic.”

Yet recent studies by entomologist Kimberly Stoner and colleagues at the Connecticut Agricultural Experiment Station have found two neonicotinoids, imidacloprid and thiamethoxam, in the nectar and pollen of squash to which the pesticides were applied as directed. Published research by environmental chemists at the U.S. Geological Survey documents the presence of neonicotinoids in rivers and streams. Data collected by Washington State’s Benbrook and colleagues also shows residues in numerous foods.

“There’s going to be a shortage of bees in this entire growing season,” Frazier said of the U.S. situation. “The ability to replace bees that have been lost has been exhausted, so there’s a very large question mark about next year. Whether we’ve reached a point of no return, we don’t know.”