Posted by focusthenation on Wednesday, 12 September 2018 in Climate Change 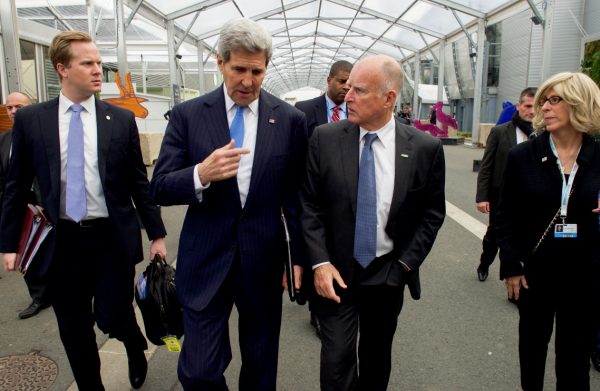 SAN FRANCISCO (KPIX 5) — People from around the world gathered in San Francisco Tuesday a day before the start of the Global Climate Action Summit as the international community looks to California for solutions to climate change.

Hundreds of scientists, business leaders and political leaders will gather at Moscone Center on Wednesday for a three-day climate change summit.

“We have to make the decarbonization of the global economy the central organizing principle of human civilization in order to stave off the climate crisis in time to avoid the truly catastrophic consequences,” said Gore.

“Carbon pricing is here; all you need to do is do it. Create the mechanism,” said Brown on Tuesday as he welcomed many visitors who wanted to learn more about global warming and what California was doing about it.

Organizers say this is really what it’s about: delegates from around the world meeting, speaking through six translators to give indigenous people a seat at the table.

“We believe we can save the earth only if we work together hand in hand,” said Rukka Sombolinggi of Indonesia.

“It’s about restoration resilience and conservation in that the indigenous people have a lot to show,” said Manuel Pulgar Vidal of Peru.

Representatives from the Amazon to Indonesia expressed their disappointment with the current political climate in the United States, and the decision to exit the Paris Agreement.

But they say this summit proves California is a leader and sends the message that other small governments can take steps forward on their own.

Back in 2002, a state law mandating 20 percent green energy was passed, then in 2015, another law upped the requirement to 50 percent.

“We’re not going to solve the problem of global warming without a lot of problems, without a lot of controversy, a lot of heartache. But we got to keep our eye on the ball and keep moving forward,” said Brown.

There’s concern that such a drastic shift in energy usage may deter businesses from coming to California, a state where manufacturers are already reportedly paying a 72 percent premium over the national rate for industrial rates.

“I think betting on technology is a concern for manufacturers who have to deal with the reality that we’re in today, and are making planning decisions further out,” said Michael Shaw of the California Manufacturers and Technology Association.

Brown said that around 20 percent of the state’s climate change strategy comes from the cap and trade program which gives economic incentives for companies to reduce green house gas emissions.

If successful, the new energy bill would make California the largest economy in the world to use 100 percent clean energy.

Starting Tuesday, Howard Street between 3rd and 4th Streets – which runs right past the summit’s venue – will be closed for the rest of September.