Posted by Wolf on Monday, 28 May 2012 in Green Products/Services

An LED Bulb That Lasts 20 Years 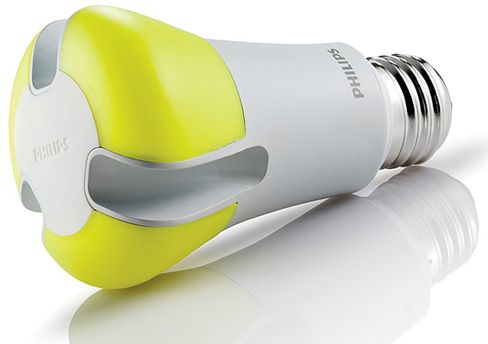 A new LED (light-emitting diode) from Philips promises to last 20 years – more than 25 000 hours. The LED light bulb was launched commercially in stores on Earth Day.

For more than one hundred years, Thomas Edison’s incandescent light bulb has been on the market. Though providing excellent light quality, incandescent light bulbs are notorious for low energy efficiency: About 1/10 of the electrical energy that is put into the bulb is actually converted into light – the rest ends up as heat-waste.

Won the Department of Energy Award

The reason why Philips has built the new LED bulbs in the first price was to win the U.S. Department of Energy’s L Price competition. This was an initiative brought on the table by the U.S. DoE to aware people of the incredible inefficient incandescent light bulbs, encouraging them to switch to more energy conserving alternatives.

Philips won the competition back in early August 2011; however, they did not release their prize-winning LED bulbs on the market before a week ago, on April 22.

How Much Does It Cost?

The net price of the new LED from Philips is currently at $60, which is several times greater than what you would have to pay for both an incandescent and a energy-saving light bulb (CLF).

On the other hand, the lifetime is about 25 times as great as incandescent light bulbs, which typically only lives around 1000 hours. The increased energy efficiency of a LED also has to be taken into account.

Estimations show that if the new LED light bulb replaces an incandescent light bulb and is used 4 hours a day, $8 is saved every year in electricity costs. Replace all incandescent in your house with the new LED and the savings increase accordingly. This means that after 7.5 years, the initial cost of the LED is paid down saved in terms of reduced energy costs – with another 12.5 years remaining on the lifetime.

There are still literally a ton of incandescent light bulbs that are in use today. If every 60-watt incandescent was replaced by the new LED, the U.S. would save almost four billion dollars every year. Imagine how much energy is wasted.