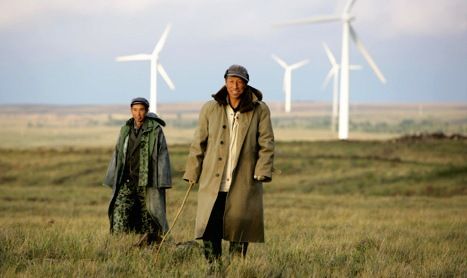 New report says renewables’ share of China’s energy use will rise, but predicts coal consumption up 35% and carbon emissions up 43% this decade.

A new report, China energy: a greener shade of grey, from the Economist Intelligence Unit (EIU) highlights China’s expansion of renewable energy, but says the country’s voracious demand for coal – and problems in the renewables sector – mean that China’s energy policy is moving, at best, to a “greener shade of grey”.
The report, compiled by EIU Energy Editor Martin Adams, features detailed summaries of current trends and the latest EIU projections for key renewables sectors.

Adams explained:
“With a mixture of new-fangled carrots and old-fashioned sticks, China is opening up a continent-sized economy for renewable energy equipment. Our report looks at the challenges in each of these sectors and asks whether we are witnessing the birth of a low carbon economy, or merely the application of a greenish tint to the same old dirty energy policy.”

Among the report’s key conclusions are:
· Chinese energy consumption grew by 136% in the decade to 2011.
· There are signs of hope: Renewables will increase their share of China’s energy use from 13% to 16% between 2010 and 2020; the current Five Year Plan is the first to set a carbon intensity target – seeking a cut of 17% in carbon emissions per unit of GDP; there is credible talk of a cap on energy use, and plans for a carbon tax are advanced.
· But China’s appetite for coal shows little sign of diminishing: the temptations of the world’s third-largest coal reserves remain as strong as ever and the country is investing vast amounts in infrastructure build-out to support coal power. The EIU predicts a 35% increase in coal consumption this decade. Carbon emissions from fuel will increase 43% over the same period.
· In the wind power industry, structural cracks are beginning to show. 28% of turbines are not even connected to the grid. Profits have tumbled and installation growth will level off. Chinese turbine makers are being forced to look to overseas markets.
· The production of solar power equipment has been stimulated without commensurate encouragement of the market for solar output. China’s government is now stepping in to support the solar industry, but the sector is ripe for consolidation
· Hydropower capacity grew by 80% between 2005 and 2010 and dammed rivers account for a fifth of China’s generating capacity. Capacity will increase significantly up to 2015, after which growth will slow as the complexity of hydro projects (remoteness, environmental issues, relocation of people) forces Chinese companies to explore overseas markets.
· As generator of one-quarter of the world’s rubbish, China’s approach to waste incineration matters. Its target of moving away from landfill to burn 30% of waste to produce energy by 2030 sounds commendable, but current incineration practices are often environmentally dubious. Controls are lax, waste is often laced with up to 70% coal, and emissions can be more harmful that coal-fired power generation.

Summarising the report’s findings, Martin Adams said:
“China has been proactive and innovative in terms of legal and regulatory efforts to green its energy mix. It is doing more than many developed countries to address the problem of global warming.

“But, as ever, China’s sheer size amplifies its significance. The continued demand for coal, and the problems we identify within the renewables sector, make for a gloomy outlook, literally and metaphorically, on energy use and carbon emissions. If there is a saving grace, it is that China will continue to drive down the cost of generating power from wind, sun and rivers. This will make it the main engine of the green economy for years to come.”