Posted by Angel on Wednesday, 23 May 2012 in Sustainable Development

L.A. makes history with ban on plastic bags at stores 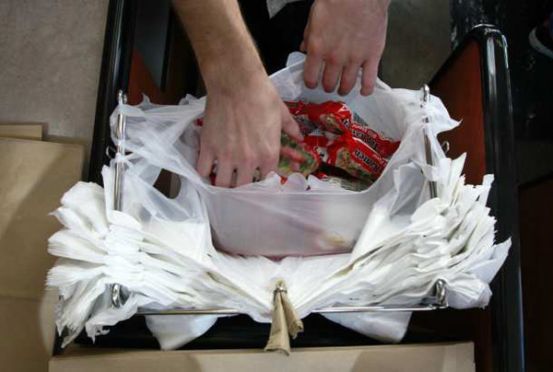 Los Angeles became the largest city in the nation to approve a ban on plastic bags at supermarket checkout lines, handing a hard-fought victory to environmentalists and promising to change the way Angelenos do their grocery shopping.

The City Council voted 13 to 1 to phase out plastic bags over the next 16 months at an estimated 7,500 stores, meaning shoppers will need to bring reusable bags or purchase paper bags for 10 cents each.

The ban came after years of campaigning by clean-water advocates who said it would reduce the amount of trash in landfills, as well as the region’s waterways and the ocean. They estimate that Californians use 12 billion plastic bags a year and that less than 5% of the state’s plastic bags are recycled.

Los Angeles become the latest in a string of California cities – including San Jose, San Francisco and Long Beach – to ban plastic bags.

Plastic bag bans across California vary in scale, with some applying to all retailers and restaurants, and others covering only supermarkets. Some are silent on paper bags while others, like Los Angeles County’s, require markets to charge customers who want to use paper bags.

Officials in some cities with bag bans hail the program as a success.

Santa Monica’s plastic bag ban has been in place since September. “There’ve been no citations necessary to give out,” said Josephine Miller, a city environmental analyst. “No stores have gone out of business.”

San Francisco approved the state’s first plastic bag ban in 2007, applying it only to supermarkets and pharmacies. Since then, officials have moved to expand the bag restrictions, which has drawn a legal challenge.

Despite initial grumbling from customers and business owners, people have gotten used to bringing their own bags, said David Assmann, a manager in San Francisco’s environment department. “I think it’s become part of the culture here,” he said.

In Los Angeles County, the 10-cent paper bag fee has led to a 94% reduction in the use of those bags, said Jennie R. Romer, founder of www.plasticbaglaws.org, who has advised cities on the passage of bag laws.
Things went less smoothly in Oakland, which was sued over its bag ban. That city dropped its measure but will be covered by Alameda County’s plastic bag ban starting next year.

Council members in Los Angeles were egged on Wednesday by actress Julia Louis-Dreyfus and an array of environmental groups. As they prepared to approve the ban, city lawmakers called on their counterparts in Sacramento to follow suit.

“Let’s get the message to Sacramento that it’s time to go statewide,” said Councilman Ed Reyes, who is pushing an effort to revitalize the Los Angeles River.The council’s decision kicks off a four-month environmental review, followed by what is expected to be routine passage of an ordinance enacting the ban.

As they celebrated their action, council members quietly backed away from a more controversial plan to also ban use of paper grocery bags, first proposed last year by appointees of Mayor Antonio Villaraigosa.

Once the plastic bag ban ordinance is enacted, larger stores will have six months to stop handing out plastic bags and smaller markets will have 12 months. After that, retailers would be required to charge 10 cents for each paper bag they provide customers.

“My hope is that so few paper bags will be used as a result of this measure that the formal ban … on paper bags may not even be necessary,” said Councilman Paul Koretz, who initially had hoped to prohibit paper as well.

Employees of plastic bag companies – many in T-shirts with the message “Don’t Kill My Job” – pleaded unsuccessfully with council members to change course, saying they feared they would soon be unemployed.

An industry group warned that the council’s decision will threaten the jobs of 2,000 workers statewide and said it is keeping open the option of filing a legal challenge. “With this bag ban, the city chose to take a simplistic approach that takes away consumer choice instead of pursuing meaningful programs that encourage greater recycling of plastic bags and wraps, while preserving jobs,” said Mark Daniels, chairman of the nonprofit American Progressive Bag Alliance.