Posted by plantitfilm on Friday, 09 March 2012 in Fishing 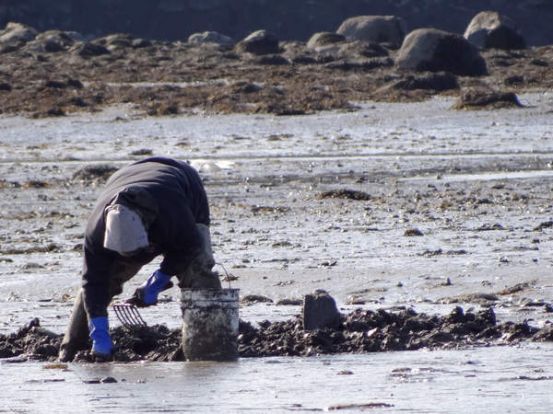 ROCKPORT — When it comes to the acid-base balance in human blood or ocean water, a small change can mean a lot. That was the message presented at a March 3 seminar at the Maine Fishermen's Forum.

The scale between acid and base conditions is expressed using the term pH, on a range from 0 to 14. Pure water is neutral, with a pH of 7. A lower number designates acid conditions.

Acid in ocean water is a significant challenge to creatures that use calcium to build their shells.

"In the last 20 years, pH has changed 2 percent," he said, citing a study on the West Coast. He said a similar change in human blood where the pH is close to that of oceans would put a person in a coma.

"A lot of people think [global climate change] is generations away," he said. "What is happening to clams is happening now."

Payne said pH in sites where there were not enough adult clams to harvest averaged 7.6 while productive areas had average readings of 8.2. He said a pH lower than 7.8 led to 100 percent mortality of juvenile clams.

"It takes about three to four years for a clam to grow to legal size," said Payne. He said a healthy environment is needed to guarantee future years of harvesting.

Bill Mook grows clams for market at Mook Sea Farms in Walpole. He said six years of failures, due to shell dissolution, in West Coast hatcheries and wild-harvested shellfish provided the first alarm about the relationship between CO2, ocean acidification and shellfish mortality.

Because mollusks make their shells from calcium carbonate, they are more vulnerable to acid conditions than crustaceans, such as lobsters.

Since learning about the problem, Mook has monitored the effects of acidic conditions on the oysters he grows in Maine.

"The world's oceans are 30 percent more acidic, since the Industrial Revolution," said Mook. He said that could triple by the end of this century.

He has seen a decrease in the growth rate of juvenile clams and abnormal swarming when the pH is lower than 7.8.

"Ocean acidification is the monster, lurking under the bed," he said.

Josh Hall is a graduate student at the University of Maine's Aquaculture Institute. He said while adult lobsters' shells are more resistant to acidic water, the larval and juvenile lobsters he exposed to higher CO2 levels were unable to manufacture as much shell mass as those in the control group. The shells they did build were not as strong, he said.

For his experiment, the control group was in water with a pH of 8.5, while the acid environment had a pH of 7.9.

"These animals have to spend more energy to reach the same level of development," said Hall.

Spruce Head lobsterman Bob Baines said there have been many changes in the lobster industry in recent years.

"I heard from Nova Scotia that shells are not as hard," he said. He said lobstermen have a lot of knowledge to bring to the discussion.

"Maybe we can see something coming," said Baines.

Jon Eaton of the Georges River Tidewater Association, in Thomaston, said the relatively small estuary that begins in Warren's Payson Park provides more than one-eighth of the clams harvested in Maine.

Eaton said the St. George River flows very slowly, creating the mud flats where clams are found and providing an environment that changes more slowly than in faster-moving rivers. Just above Thomaston, it takes up to eight days for the action of the tides to completely flush new seawater through the estuarine system.

Because of this, he said, clams in the St. George would show signs of shell deterioration from an overly acidic environment before other indicators might register.

The association has been developing a monitoring program with the assistance of Friends of Casco Bay, the Gulf of Maine Council on the Marine Environment, and the Maine Department of Environmental Protection. GRTA is looking for people to sponsor sampling kits that will be shared with other groups.