Posted by amir on Wednesday, 05 September 2012 in Oil Spill

The High Cost of Oil Spills in Nigeria 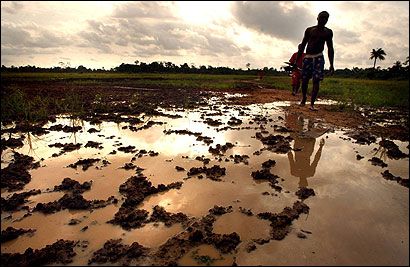 The oil spills, which a United Nations report says may require the world's biggest cleanup operation, is making life miserable for the people of the Ogoniland region of southern Nigeria. “Every Ogoni person is a potential cancer patient,” said Magnus Abbe, a senator and spokesman for a delegation from the Ogoniland region. Abbe and his delegation met with Jonathan on Monday. “Tragic and catastrophic as the situation is, the Ogoni people are concerned by a protracted and near absence of a strategic response by the federal government to the findings of the (UN) report,” he added.

A momentous report issued by the UN's environmental agency in August 2011 said oil pollution in Ogoniland might require the world's biggest cleanup. It added that energy firms have devastated various regions in Nigeria over the past 50 years.

The fishing community is demanding government action against ExxonMobil, but so far there is no sign that their efforts are getting anywhere. An Exxon subsidiary in the area has denied causing the pollution. Fisherman John Etim said, “Mobil continue to deny that there is no oil spill, but here you are, this is the one, very recent. They must have poured the chemical (oil) right in high sea, but they can't deny that this is not oil.” A trader stated, “Since the spill occurred, fishing activities have reduced, and we buy fish at a very high cost, which makes it difficult for us to resell it to customers.”