Posted by EarthDude on Sunday, 24 July 2011 in Earth Violators

Exxon Mobil Corp will bring in more people to mop up oil from a broken pipeline beneath the Yellowstone River as receding floodwaters reveal new contamination, federal officials said Friday.Also Friday, Montana environmental regulators said the pipeline may have leaked up to 1,200 barrels of oil into the scenic river. That equals 50,400 gallons and is 20 percent higher than prior estimates from Exxon Mobil.

Water levels on the Yellowstone have dropped six feet since the July 1 accident. Hundreds of logjams and debris piles, many coated in a layer of drying crude, now litter its banks and islands. 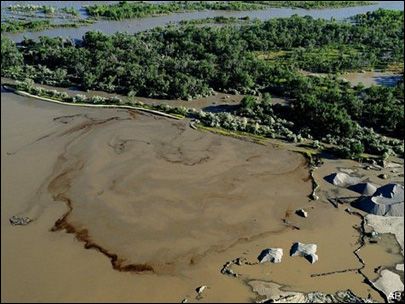 After burning the piles was rejected by state officials, representatives of the Environmental Protection Agency said Friday that oiled debris will have to be pulled apart, run through wood-chippers and hauled away.

EPA on-scene coordinator Craig Myers said that will take more people than the 750 Exxon Mobil now has in Montana for the spill.

"They're planning on ramping that up in short order," Myers said Friday as he toured an area along the river where dozens of cleanup workers were cutting down oil-fouled trees and plants.

Standing in front of a jumble of weathered wood smeared with crude, Myers said the prevalence of the piles "is going to change how many people Exxon has to get in here to deal with those."

Most of the work to date has been concentrated along a roughly 30-mile stretch of river from the spill site in Laurel downstream to east of Billings. Exxon Mobil spokeswoman Claire Hassett would not say how many more people might be brought in or whether that would speed a cleanup that the EPA wants done by Sept. 9.

"We intend to bring in the resources we need to ensure the cleanup is conducted efficiently and thoroughly," Hassett said.

The investigation into why the pipeline broke could take months to complete, pipeline safety officials have said.

Floodwaters pushed oil deep into back waters and side channels along the river, where trees are now ringed with oil several feet off the ground.

Crews also have found oil on numerous islands along the river. Myers said wood chippers and other equipment would be flown to those islands by helicopter, which would also be used to cart away oiled debris for disposal in out-of-state landfills.

A total number of sites with oil has not been established. Forty-six were found from the air in the first days after the spill. Since then, the government has stopped tallying individual sites, and it hasn't it been able to provide any mileage or acreage estimates for land and shoreline impacted by the spill.

The higher spill volume estimate of 50,400 gallons was based on the state's determination that the pipe did not just have a hole in it but was completely severed, said Mike Trombetta with the Montana Department of Environmental Quality.

Exxon Mobil did not immediately respond to an inquiry from The Associated Press about the higher volume.

The company this week told the EPA it has finished initial cleanup work on four or the original 46 sites. The Environmental Protection Agency and the state Department of Environmental Quality will assess whether the work was adequate.

State cleanup standards are stricter than federal rules, and DEQ officials say cleanup will continue until the work would do more harm than good to the environment

Also Friday, state officials said fish caught from the Yellowstone between Park City and Custer should not be eaten pending tests for toxins. Fish continue to accumulate oil in their system for about 40 days after oil gets into water, said Bob Gibson with Montana Fish Wildlife and Parks.

Results from tests on fish captured by wildlife agents this week are expected by early August. Those tests are likely to continue through the summer, Gibson said.

Matthew Brown of The Associated Press wrote this report.