Posted by stephanie on Monday, 16 March 2015 in Fossil Fuels 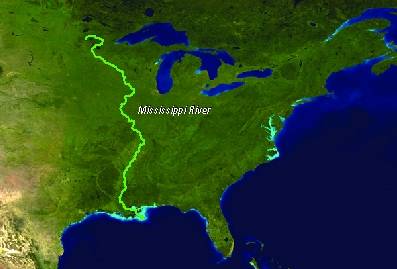 The U.S. Environmental Protection Agency issued a grave warning about the Mississippi River on Saturday. Because of an oil spill, it said, the cultural landmark is in “imminent and substantial danger” of being contaminated.

The oil spill came from a train carrying 103 cars of Bakken crude oil from North Dakota. On Thursday afternoon, 17 cars of that trainderailed in northern Illinois, each carrying approximately 30,000 gallons of crude. EPA officials aren’t sure how much oil has spilled, but noted that a seasonal wetland has already been affected. The river, one of its tributaries, and the Upper Mississippi National Wildlife and Fish Refuge are all in danger of contamination, the agency said.

This isn’t the first time in recent months that one of North America’s most powerful and historic rivers have been threatened by oil. In the last year, the Mississippi, the Yellowstone, the Missouri, and the Ohio Rivers have been contaminated because of oil train derailments, barge crashes, and pipeline spills. Here are some of the more significant incidents.

In addition to the spill it’s been subjected to this week, the Mississippi River got a taste of an unknown amount of ethanol last month, after a freight train derailed and slid on to the frozen river in Iowa.

In this aerial photo, river traffic is halted along the Mississippi River between New Orleans and Vacherie, La., due to a barge leaking oil in St. James Parish, La., Sunday, Feb. 23, 2014.

That incident was almost exactly a year after a more significant incident, when 31,500 gallons of light crude spilled into the river in Louisiana. The spill occurred when a barge carrying oil crashed into a tugboat between Baton Rouge and New Orleans. Sixty-five miles of the river had to be shut down after the incident to allow for clean-up.

The Yellowstone River was the victim of arguably one of the most tragic oil-related mishaps so far in 2015. In January, a pipeline underneath the river breached, letting out 50,000 gallons of crude oil.

Thousands of Montana residents were told not to drink their waterbecause of potential contamination. And clean-up proved difficult, because the river was so frozen over that oil became trapped underneath thick sheets of ice. Cleanup crews had to bore holes in the ice and attempt to vacuum it up.

For some Montanans, the January spill brought unwelcome nostalgia. In July 2011, 63,000 gallons of crude poured into the Yellowstone River, about 200 miles upstream.

It wasn’t a huge spill, but the incident that causedup to 8,000 gallons of diesel to leak into the Ohio River last August certainly had a large impact. Cincinnati’s water department was forced to temporarilyshut down intake valves, and 15 miles of the river was closed off to transportation. The spill took several days to fully clean up.

A few months before that, about 1,600 gallons of an oil-based lubricant leaked into a tributary of the Ohio River after an equipment failure at an oil and gas well. The oil-based fluid is called “mud,” and is used to lubricate the equipment in the well bore during drilling.

This was a big one. While not oil per se, it was the largest-ever spill of saltwater drilling waste in North Dakota. Nearly 3 million gallons of the waste — which is up to eight times saltier than seawater and lethal to vegetation — spilled from a North Dakota pipeline in January, eventually making it to the Missouri River, the Associated Pressreported.

It’s not clear how much of the saltwater, otherwise known as brine, got into the Missouri River. One state health official told the Associated Press that the contaminants were quickly diluted by the river water. But Karl Rockeman, the director of water quality at the North Dakota Department of Health, told the Williston Herald that “high readings” of contamination were found where the Little Muddy River — one of the creeks impacted by the spill — enters the Missouri.