Posted by Wolf on Monday, 24 October 2011 in Transportation

Getting Away From Oil 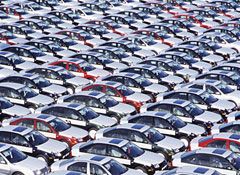 At long last, America is taking steps to end our dangerous addiction to oil. With two announcements in the same number of weeks, the Obama administration announced plans that will require every new vehicle on the road to go farther on a gallon of gas, reducing the risk of more oil spills and the dangerous pollution of our air, all while spurring new job creation.

In late July, while the rest of Capitol Hill simmered in debt ceiling brinksmanship, President Obama unveiled a clean car standard that requires cars and light trucks to reach the equivalent of a 54.5 miles-per-gallon (mpg) standard by 2025, doubling today's lackluster 27 mpg requirement. A few days later, the president went further and announced the first-ever fuel economy and global warming pollution standards for heavy-duty vehicles, ensuring that vehicles ranging from semi-trucks to buses to the largest pick-up trucks will finally get beyond the shockingly low 6.1 mpg now required for these gas guzzlers.

Combined, these two announcements represent the single biggest step the nation has ever taken toward getting America off oil. By 2030, the cars and light trucks proposal alone could cut our addiction to gasoline by 1.5 million barrels per day, while the new heavy-duty trucks standard will reduce daily consumption by another 300,000 barrels per day. Together that's a reduction of our daily oil imports roughly equivalent to what we import from the entire Persian Gulf every day.

The environmental benefits gained by slashing our oil dependence are clear: from reducing the risk of disastrous spills like the one in the Gulf of Mexico last year, and more recently in the Yellowstone River, to protecting our air from dangerous smog pollution that triggers asthma attacks and other respiratory problems. The new rules also will cut carbon pollution emitted into our air by more than 330 million metric tons each year -- roughly equal to the annual carbon pollution released by 85 average coal-fired power plants.

And that's not all. Beyond benefits to our environment and our health, the new rules will help in these tough economic times saving drivers nearly $45 billion per year on gas -- even after accounting for the cost of the new technology -- and creating more than 600,000 new jobs. As President Obama noted in a speech before Congress "We shouldn't be in a race to the bottom, where we try to offer ... the worst pollution standards. America should be in a race to the top."

Announcing that cleaner vehicles will soon be on the road moves us ahead in that race. But announcements alone won't get us all the way to the finish line. Although the official proposal for cars and light trucks is expected to come out this fall from the Environmental Protection Agency and the Department of Transportation, we won't see a finalized version until 2012.

This means over the next few months lobbyists representing the auto dealers and others have plenty of time to try to weaken the proposal and riddle it with loopholes. In fact the National Association of Auto Dealers has already announced its plans to attack this historic standard, and its intention to try and delay the standard as much as possible.

One of the most outrageous loopholes the auto lobbyists will likely lobby for is overly generous incentives for light trucks designed to help them meet the new standards. This would be the same type of loophole that encouraged bigger and bigger SUVs in the 1990s and resulted in U.S. auto makers being unable to compete with foreign auto makers when consumers started demanding more fuel-efficient cars and trucks.

So we applaud President Obama and his administration for announcing these rules, but we can't afford to rest on our laurels now. We need to be vigilant to ensure that these clean car standards are as strong as possible, and kick any proposed loopholes to the curb.

And we must make sure our leaders in Washington soundly reject the lobbying efforts by the National Auto Dealers Association and others to delay or block these much needed standards.