Posted by plantitfilm on Friday, 11 November 2011 in Earth Violators 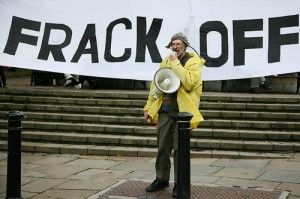 Given the twin concerns of peak oil and climate change, it's no surprise that natural gas (with its lower carbon intensity than coal) has been hailed by many as the salvation of our modern way of life, at least for now. And with the discovery of enormous deposits under Marcellus Shale in the Eastern US, and other deposits in the Southwest, it's even more appealing, since that is keeping prices relatively low.

In fact, according to EPA Administrator Lisa Jackson, President Obama "has made clear that natural gas has a central role to play in our energy economy."

Unfortunately, in our eagerness to get our hands on all that shale gas, we have allowed what seemed to be an expedient solution to be applied, once again, without truly understanding its broader implications.

Apparently, we seem to be having a hard time learning the basic lesson that everything is connected to everything else, even if it's underground. So, it seems that large volumes of water pumped into the ground at high pressure, in a process called hydraulic fracturing or fracking, does not simply disappear.

Unfortunately, once the water has finished doing its work of breaking up the shale layers to allow the gas to be collected, it doesn’t necessarily stay put. In fact it often finds its way into groundwater, wells and waterways.

According to Water Contamination From Shale, “Landowners in shale gas drilling areas have reported foul smells in tap water, and toxic chemicals, such as benzene, have been detected in water from wells near drilling sites. In some cases, tap water can even be set aflame because it is contaminated with volatile chemicals because of shale gas drilling.”

This, up until now, has been the primary objection that many groups have raised to the practice, which they claim, is reckless and is being implemented with insufficient consideration of the wider-ranging consequences.

Now, there appears to be another problem. Earthquakes. Given that the geological structures found beneath the ground are the result of dynamic processes and not of intentional design, they are not always as stable as they could possibly be. In some cases, the disturbance caused by the injection of high pressure water jets designed to fracture rock could cause them to collapse. This is apparently what happened at a fracking site near Blackpool, in England. This is not simply the pet theory of some fringe environmental group trying to pin the blame for a natural phenomenon on a company performing operations that they vigorously object to.  In fact, it was the fracking company itself, Cuadrilla Resources, who announced after an investigation that, “It is highly probable that the hydraulic fracturing of Cuadrilla’s Preese Hall-1 well did trigger a number of minor seismic events.”

The company went on to say that it was “due to an unusual combination of geology at the well site coupled with the pressure exerted by water injection as part of operations,” and that “this combination of geological factors was extremely rare and would be unlikely to occur together again at future well sites.”

But despite this last claim, the US Geological Survey recently announced findings indicating that fracking operations may have been responsible for as many as 50 earthquakes in Oklahoma last January. Here is an excerpt from the report.

While the report does not claim to definitively prove the connection (it is still under peer review), it does indicate, “strong correlation in time and space as well as a reasonable fit to a physical model suggest[ing] that there is a possibility these earthquakes were induced by hydraulic fracturing.”

So with all these problems, where does that leave fracking?

A recent article in the NY Times describes a new technique using liquefied propane gel instead of water which appears to be cleaner and safer. The magic behind this process lies in the fact that under high pressure and temperature, the propane gel turns into a gas when it’s done so that is be sucked up and collected and eventually burned along with the other natural gas it has been used to collect. The company behind this is GasFrac. As an added benefit, says their CTO Robert Lentz, “we leave the nasties in the ground, where they belong.” The “nasties” are all the chemical additives that are apparently required to release the gas from between the rock layers.

I’ve been saying all along that there has to be a better way of getting that gas out of there, if we need to, without doing so much in the way of collateral damage. I don’t know if this method is the best of all possible methods, but it sounds like a heck of an improvement over fracking.

RP Siegel, PE, is the President of Rain Mountain LLC. He is also the co-author of the eco-thriller Vapor Trails, the first in a series covering the human side of various sustainability issues including energy, food, and water. Like airplanes, we all leave behind a vapor trail. And though we can easily see others’, we rarely see our own.