Posted by Wolf on Friday, 11 November 2011 in Fossil Fuels 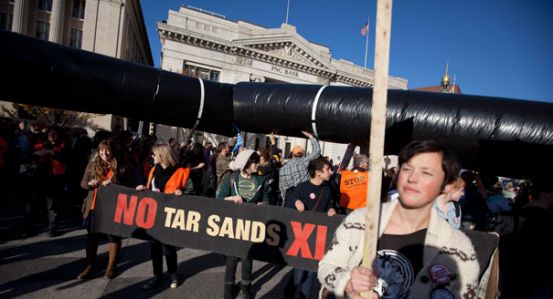 The U.S. government on Thursday delayed approval of a Canada-to-Texas oil pipeline until after the 2012 U.S. election, bowing to pressure from environmentalists and sparing President Barack Obama a damaging split with liberal voters he may need to win reelection.

The decision to explore a new route for TransCanada Corp's Keystone XL oil pipeline to avoid fragile territory in the Sand Hills of Nebraska dismayed the Canadian government, which had lobbied assiduously for the $7 billion project.

It also drew a harsh reaction from the oil industry and from Republicans in Congress who accused Obama of sacrificing jobs for the sake of his reelection.

The State Department suggested that looking at new routes for the pipeline within the state of Nebraska would take until at least the first quarter of 2013, well beyond the November 6, 2012 U.S. election. The department had previously said it hoped to make a final decision by the end of this year.

TransCanada, which proposes to build and operate the pipeline, said it remained confident that it would ultimately win approval. Industry analysts had previously said a significant delay could kill the project.

The Obama administration said U.S. domestic politics played no part in the decision. Analysts suggested the delay may actually be an effort to split the difference.

"Politically it's an effort to avoid antagonizing either side of the issue," said David Pumphrey, a senior fellow at the Center for Strategic and International Studies and former Energy Department official.

"Both sides are likely to be disappointed, but since it's impossible to calculate the most damaging outcome, better to buy time," Pumphrey said.

Photo shows demonstrators calingl for the cancellation of the Keystone XL pipeline during a rally in front of the White House, November 6, 2011.