Posted by EarthDude on Tuesday, 23 August 2011 in Fossil Fuels

The Problem with the Pipeline

The proposed Keystone XL Pipeline would start in the town of Hardisty, which about a hundred and twenty-eight miles southeast of Edmonton. It would cross the Canadian-U.S. border in Montana, jog through western South Dakota, then head down through Nebraska, Kansas, and Oklahoma all the way to refiners on the Gulf Coast. The pipeline, a thousand seven hundred and two miles long, would carry crude from what supporters call the oil sands and critics the tar sands—a huge deposit of very heavy hydrocarbons in central Alberta. (I wrote about the Alberta tar sands for The New Yorker in 2007.) 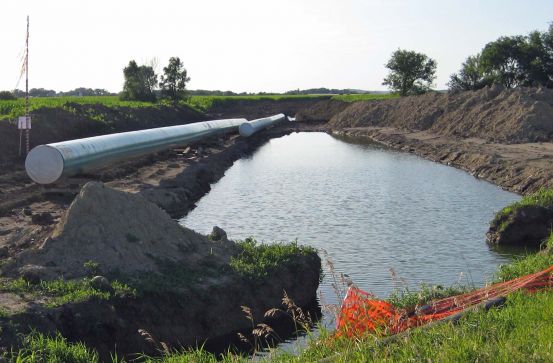 Today is Day 4 of a “Stop the Pipeline” sit-in at the White House, and so far two hundred and twenty-two people have been arrested, including, just this morning, the actress Margot Kidder. The sit-in is being billed as “the biggest act of civil disobedience in the history of the climate movement.” In a phone interview from D.C., Bill McKibben, the moving force behind the protests (and a former staff writer for The New Yorker) described it as “very civil” disobedience.

“People are getting arrested for the not-very-profound crime of sitting in what’s called the postcard zone right in front of the White House,” McKibben explained. “People just go out there and sit down; the park policemen give them three warnings, and then start handcuffing them one after another.” McKibben himself was in the first group to be arrested, on Saturday. Apparently hoping to discourage the protest, the D.C. police kept the first group locked up for two nights in the city’s central cell block, an experience that, McKibben said, “is exactly as much fun as it sounds.”

Because the proposed pipeline would cross an international border, it requires approval from the White House. The project has been under review for more than two years now, and what to do about it seems to be a subject of considerable debate within the Administration. Last year, the Environmental Protection Agency rated an environmental-impact statement submitted by the State Department “Inadequate-3,” because “potentially significant impacts were not evaluated.” The State Department submitted a new one, and in June the E.P.A. once again characterized it as inadequate. The State Department is expected to submit a final version of the statement by the end of this month.

As the E.P.A. has pointed out, there are many reasons to be concerned about the impact, both local and global. The pipeline would pass through Nebraska’s Ogallala aquifer, which provides more than seventy per cent of the state’s drinking water and more than eighty per cent of the water used for irrigation. Because tar-sands oil is so thick, it has to be diluted in order to flow, and one of the solvents that is commonly used is benzene, a known carcinogen. And because tar-sands oil is so heavy, it has to be very heavily processed, which requires tremendous amounts of energy, usually in the form of natural gas. It’s been estimated that, on what’s known as a well-to-tank basis, tar-sands oil is responsible for eighty per cent more greenhouse-gas emissions than ordinary crude. Several scientists have warned that expanding the use of tar sands and other so-called unconventional fuels would negate any other actions the world might take to reduce climate change. “An overwhelming objection is that exploitation of tar sands would make it implausible to stabilize climate and avoid disastrous global climate impacts,” NASA’s James Hansen wrote recently.

“I think we’re beginning to make it clear to the Administration that this is the premier environmental test that they will face between now and the next election,” McKibben said. He added that he and his fellow protesters had emerged from jail yesterday with “pants drooping, because they took away our belts, but spirits high.”