Posted by plantitfilm on Thursday, 27 October 2011 in Fossil Fuels 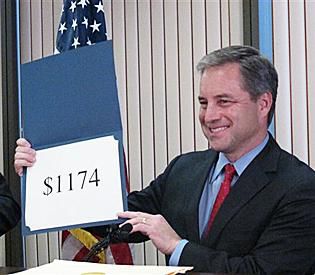 JUNEAU, Alaska (AP) — Alaska Gov. Sean Parnell proposed a new way forward on a natural gas pipeline Thursday, saying if demand for gas has shifted from the Lower 48 to Pacific Rim markets, the state must be willing to move with it.

Parnell, in a speech to an oil and gas industry group in Anchorage, said he wants the major North Slope players — Exxon Mobil Corp., BP and ConocoPhillips — to coalesce behind a project that would allow for liquefied natural gas to be shipped overseas. He wants them to do this under the framework of the Alaska Gasline Inducement Act. If they do, the state can be flexible, including talking tax and royalty terms, he said.

Parnell has been loath to discuss fiscal terms until there's an actual project.

He said the current proposal, a line that would run into Canada and provide gas for North America markets, appears stalled. And "status quo stalled talks" aren't acceptable to Alaskans, he said.

"We will not wait another legislative session for progress," Parnell said. "We want our gas unlocked for Alaskans' benefit and for the benefit of our children and grandchildren."

Parnell's proposition may be dicey: BP and ConocoPhillips have bristled at the Alaska Gasline Inducement Act, going so far as to pursue their own project outside the confines of that act. That joint venture, Denali-The Alaska Gas Pipeline, ended without a successful project earlier this year.

Plus, there's no love lost between the three companies.

And given the frustration many lawmakers have with the lack of progress on a line, Parnell runs the risk of the Legislature doing more than simply changing timelines if he opens the door to revising the gasline inducement act.

Parnell has noted a change in project direction would likely require a change in timelines spelled out under the act. The next legislative session starts in January.

Many Alaskans have long dreamed of a major gas pipeline to help shore up revenues from declining oil production, create jobs and provide a more reliable energy source. But conditions have changed since the 2007 passage of the inducement act: The U.S. has endured an economic slump, gas prices haven't been high relative to oil, and there's no been shortage of gas on the market.

TransCanada Corp. is working with Exxon to advance a line under terms of the gasline inducement act. TransCanada proposed a liquefied natural gas option but so far has generally focused on the longer pipeline, into Canada.

The shorter line, as initially proposed by TransCanada, would lead to Valdez, where gas would be liquefied and then shipped to market.

TransCanada, which won an exclusive license to pursue a line under the gasline inducement act, is moving ahead with a commitment of up to $500 million in reimbursable costs from the state.

A TransCanada spokesman, Terry Cunha, did not speak directly to Parnell's comments, saying only that the company has regular conversations with different levels of the Parnell administration. He said those discussions are held in confidence, "under the terms of the License," and that TransCanada is continuing its efforts to get North Slope gas to market.

Parnell said the companies could keep the option of a line into Canada alive, but given the apparent stalemate is hoping they can rally behind the liquefied natural gas option.

It's been over a year since TransCanada ended a three-month "open season," a period of courting gas producers and seeking shipping commitments for a proposed line. TransCanada has cited both the lack of fiscal terms and resolution over disputed leases among its challenges in securing agreements.

Parnell said Thursday that a settlement had been reached with Exxon over the Point Thomson leases but that other interest-owners in the area haven't indicated publicly whether they'd sign off. Those companies include BP and ConocoPhillips.

A BP Alaska spokesman, Steve Rinehart, said his company and other owners asked to be involved in settlement talks but were not allowed. He said the proposed agreement is complex. And, "We are now working with the state and Exxon to understand both the settlement agreement and the development project that is embedded within the agreement."