Posted by raindancer on Monday, 03 October 2011 in Fossil Fuels 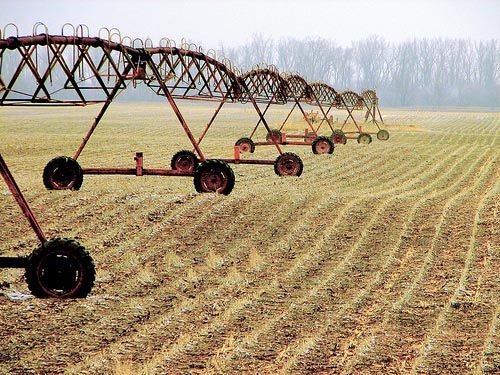 The old adage that oil and water don't mix is proving true in Nebraska, where hundreds of people filled a small town gymnasium to protest a proposed oil pipeline they fear could pollute a major U.S. drinking water source.

They came on Thursday in tour and school buses, vans and a few even on horseback to the West Holt Junior and Senior High School, some wearing cowboy boots and seed company caps, to testify at a U.S. State Department hearing on the proposed $7 billion Keystone XL oil pipeline from Canada to Texas.

The hearing was one of more than half a dozen the U.S. government is holding along the proposed route of the pipeline. But the western Nebraska gathering was the only one in the rural area that opponents fear is most at risk.

Sparsely populated western Nebraska -- which sits atop the a massive underground lake called the Ogallala Aquifer -- has become the unlikely epicenter of a major international environmental struggle.

"A leak in the Keystone pipeline could conceivably contaminate the entire Ogallala Aquifer, in turn, disrupting the agricultural economy of Nebraska," David Hutchinson, an organic rancher from Rose, Nebraska, who raises beef, buffalo, goats, potatoes and squash, testified at the hearing.

The struggle has brought together some strange bedfellows. Environmental groups and agricultural interests, normally at odds in the battle over resources, are on the same side fighting the energy industry.

American flags lined the main highway through the town of 1,300 people and signs dotted the flat landscape, with opposition placards outnumbering those in favor by 10 to 1.

Some signs read: "Stop the TransCanada Pipeline," "Save our Water" and "Save the Sandhills."

Rancher Sue Mitchell rounded up seven horses and riders to protest the proposed pipeline outside the meeting.

"We need to protect our water, and our Sandhills," said Mitchell, whose family has raised cattle and quarter horses for 80 years on their Nebraska ranch.

The Sandhills are a region in north-central Nebraska known for native prairie grasses and open spaces. Nebraskans value this region as a natural treasure and they fear the Sandhills could be damaged with an oil spill.

"The Sandhills are so fragile," said Mitchell. "One little spill of oil can ruin all the water."

Farmers worry about a possible contamination of the Ogallala Aquifer, which covers 174,000 square miles touching eight states. The aquifer is used to irrigate a significant percentage of the wheat, corn, cotton, and cattle produced in the United States. Two-thirds of the water in the aquifer is under Nebraska, according to the Water Encyclopedia.

Hutchinson said the water is very near the surface of the land in the Sand Hills and there are many springs and artesian wells. A spill could be especially damaging to these sensitive areas, he and other opponents said.

At the hearing, those opposed to the pipeline wore the red colors of their beloved University of Nebraska Cornhuskers football team. Those in favor wore fluorescent orange and yellow T-shirts.

The hearing was such a big event that the school opened the snack bar used for athletic events and people in the crowd munched on popcorn and candy.

Worried about security, Nebraska State Police blocked all roads leading to the school, but there were no arrests or violence. There was a smattering of whooping and polite applause when each person finished. Some 160 people signed up to speak and 109 people ended up testifying, officials said.

Among those testifying were some representing industries and labor unions which stand to get jobs from the project.

"People have a legitimate concern when it comes to drinking water," Whatley said. "But TransCanada and the Department of State have put unbelievable requirements on this pipeline, so it will be safe."

A Nebraska lawmaker next week plans to propose a law to the state legislature giving the state authority to regulate oil pipelines, which if passed could pose a further threat to the project.

The hearings are one of the last chances for both sides to air their views before the State Department decides the issue.

"I think we made some progress on getting the pipeline moved," said Mitchell, the rancher on horseback. "We changed some opinions."