Posted by plantitfilm on Sunday, 22 January 2012 in Oil Spill 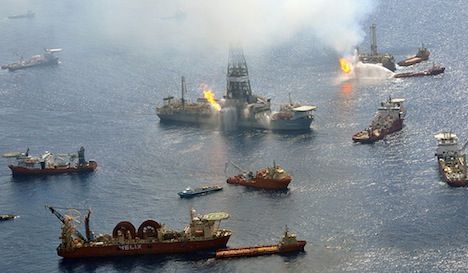 BP is likely to agree next month to pay $20-$25 billion to settle all charges around the Gulf of Mexico oil spill, according to a leading analyst, double the figure the company has set aside and more than other analysts expect.

BP and the U.S. Department of Justice (DoJ) have been silent on the progress of talks on a settlement. Sources close to the matter say a deal remains uncertain over BP's role in the Deepwater Horizon rig blast, which killed 11 workers and caused the worst offshore oil spill in U.S. history.

However, Martijn Rats, head of European oil research at Morgan Stanley -- the top ranked firm for oil and gas research in the Thomson Reuters Extel awards last year -- said he saw a 70-80 percent chance the two sides would agree a deal on civil and criminal charges within weeks.

In a research note published on Thursday, he predicted an agreement sometime between BP's full year results on February 7, and the scheduled start of legal hearings in New Orleans on February 27.

BP sources have told Reuters that talks are ongoing with the DoJ about a possible settlement and that the London-based company's board has shifted to weekly meetings to discuss progress.

Historically, the company's board has met just once a quarter, although during the height of the oil spill, it held meetings, usually by phone, daily.

Chief Executive Bob Dudley has said repeatedly that BP would like to settle, although not at any price. When asked about the matter by reporters on Wednesday, he declined to make any comment, saying it was a sensitive time to be discussing it.

BP senses the U.S. administration would like to settle the matter, not least because it is a U.S. presidential election year, the sources said, but any outcome is still seen as uncertain.

The estimated level of settlement in the Morgan Stanley note - the most detailed analysis Reuters has seen on the potential cost of the spill - is much higher than other analysts have predicted, and around double the amount BP has taken a provision for.

Senior company sources last year told Reuters that the company was prepared for a massive payout. One source predicted BP would offer "the mother of all settlements."

Another said the settlement would likely be the second-largest in U.S. legal history, putting it between the $206 billion the tobacco industry agreed to pay U.S. states for treating smoking-related illnesses and the $7.2 billion banks agreed to pay to settle litigation related to Enron's collapse.

David M. Uhlmann, a University of Michigan law professor who is the former Chief of the Justice Department's Environmental Crimes Section, agreed with the Morgan Stanley analysis.

"The total settlement could be as much as $20-25 billion, including a criminal fine of $10 billion, which would be the largest criminal fine ever imposed for any crime in the United States," he said.

"BP has little to gain and much to lose by re-living the Gulf oil spill in a federal courtroom."

BP has the money to pay a $20-25 billion settlement - it is sitting on cash pile of more than $20 billion and has billions of dollars worth of assets on the block as part of its restructuring.

Nonetheless, Morgan Stanley predicts the larger-than- expected size of the payout will weigh on BP's shares. It rates the shares "underweight" and has a target price of 435 pence, against a Wednesday close of 481 pence.

BP investors are expecting the company to announce a dividend hike at its full year results, after Dudley said late last year that it had reached a turning point after the oil spill and was now returning to growth mode.

A big settlement would limit BP's ability to lift the shareholder payout.

Morgan Stanley believes the DoJ deal will cover all criminal and civil proceedings being pursued by the government against BP under the Clean Water Act, Alternative Fines Act, other laws and BP's obligation to make good any natural resources damages.