Posted by amir on Thursday, 19 January 2012 in Wildlife Conservation

Smuggling elephants to get money to pay for identity cards. 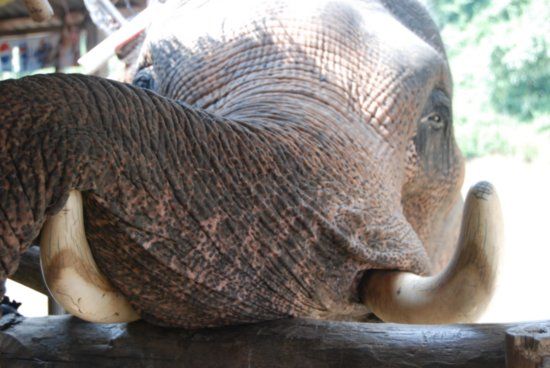 The chief of Phetchaburi's Kaeng Krachan district denied yesterday there was any need for Karen people to bribe officials, after a senior official's comment that Karen poachers were trying to smuggle elephants to get money to pay for identity cards.

Sutthipong Tanboonyasiridech dismissed the bribery comment made by Damrong Pidech, chief of the Department of National Parks, Wildlife and Plant Conservation, as untrue, and said any charges should clearly state which officials were involved.

Damrong made the comment after Tuesday's confiscation of a five-year-old elephant from a group of Karen poachers after they ran into forest rangers, leading to a gunfight that killed one Karen man and injured two others.

He said another group went to shoot elephants but the Moo 6 residents were arrested at the scene although they didn't commit the crime.

He said that despite wild elephants sometimes eating farmers' crops, the villagers didn't get too upset and hurt them. The village had had no large-animal hunters for a long time.

Boontham said a recent police raid had found wildlife skins in three Karen homes, but the residents were farmers and the skins were of serows (mountain goats) that their ancestors had hunted and kept a long time ago.

Atthapol Jaeng-reung, Tambon Padeng Administrative Organisation president, said he didn't believe the Moo 6 residents would shoot elephants and confirmed the village had no hunters because the state officials and the residents last year had signed a memorandum of understanding not to hunt animals.

Phattalung MP Naris Khamnurak, chairman of the Parliament's Committee on |Land, Natural Resource and Environment, said a committee meeting yesterday with officials over the elephant killings urged police to speed up the investigation and take into consideration park officials' opinions.

Although the officials' accounts and police versions about what happened were in part contradictory, he said the investigation would succeed because of social pressure.

Naris said he would ask the Interior Ministry to amend regulations on elephant identification so that papers would be issued from the elephants' birth rather than at age eight - as recent smuggled elephants were under this age.

He would also ask the governor of Phetchaburi province to probe the reported growth of Karen population near the park and to be stricter on the issuing of ID cards.