Posted by bchristo on Tuesday, 18 September 2012 in Wildlife Conservation 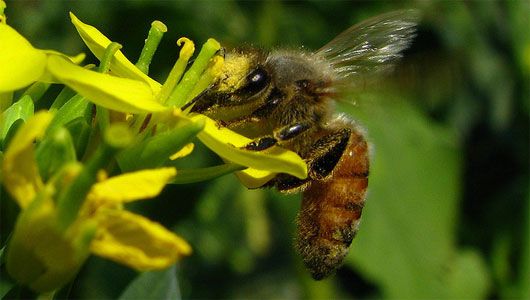 Sheila Colla wades into the pye weeds, her net swooping over the pink flowers. “This is bumble bee heaven,” she says, as she catches a bee and nudges it from the net into a small plastic vial for inspection.

It’s a lemon cuckoo bumble bee, one of the strange cast of characters in the bee world. The cuckoo bee invades colonies, usurps the queen and enslaves her workers.

There is no sign, however, of the rusty-patched bumble bee that Colla has been searching for all summer. It used to be one of the most common bees in southern Ontario and Quebec but is now one of the rarest.

In fact, the rusty-patched bumble bee, known to scientists as Bombus affinis, is the first bee in North America to be officially declared an endangered species.

Federal Environment Minister Peter Kent added the bee to Canada’s list this summer and federal wildlife advisers warn the bee appears to be on the brink of extinction.

Climate change, pesticides, habitat loss and pathogens are suspects, but no one can say with certainty why it has vanished.

Few people even realized the bee was in trouble until Colla, a PhD student at York University, documented the drastic decline. “It shows we are really not paying attention, which is kind of scary,” she says.

Bees may not be everyone’s favourite bugs – onlookers tend to take a few steps back when they realize Colla is using her net to catch bees, not butterflies – but they are key ecological players.

They’re essential for production of fruit and seeds that feed everything from bears to birds. They also pollinate crops that produce one-third of the human food supply.

“Yet most people consider them to be an irritant,” says York biologist Laurence Packer, keeper of Canada’s biggest bee collection.

The cabinets in his lab contain thousands of bees from as far north as Ellesmere Island and as far south as Patagonia. Some are the size of aphids, others big as small birds. There are also dozens of different species of bumble bees, which Packer describes as “the charismatic fauna of the bee world.”

The only species the York team avoids is the honey bee, which gets plenty of attention from other researchers.

Packer and his graduate students focus on wild bees – about 19,500 species in the world, 808 of them in Canada. They say the insects deserve more attention and appreciation, in part because they are such sensitive environmental indicators. “They’re like the canary in the coal mine,” says Packer.

And when a common species such as the rusty-patched bumble bee disappears, he says, “it’s a warning signal that things are going wrong in the great outdoors.”

Many bees across Canada are in decline. The western bumble bee has vanished from most of its range in British Columbia and the United States in the last decade, and Colla says that about half the 21 bumble bee species in Eastern Canada have seen significant population drops in recent decades.

But the loss of the rusty-patched bumble bee has been most dramatic.

The bee with a distinct orange patch on its abdomen used to forage for pollen and nectar on milkweeds, sunflowers, clovers, berry and fruit blossoms across Southern Ontario and Quebec.

Colla became intrigued in 2004 when she came across a survey from the 1970s of 3,632 bees from southern Ontario. Bombus affinis was the fourth most common of 14 species.

She repeated the survey and found not a single rusty-patched bumble bee. Colla expanded the search to other areas of Ontario and the U.S. She did eventually find two in Pinery Provincial Park in southwest Ontario: one in 2005 , the other in 2009. The bees are now skewered on straight pins and stored in a glass-covered case in the York lab.

Only one other rusty-patched bee has been spotted in Canada in the last decade. It, too, was seen in Pinery Park in 2009.

The search for the bee continues this summer. Colla and assistant Kristin Wazbinski are visiting dozens of sites where the Bombus affinis was historically found in Ontario for a project sponsored by Wildlife Preservation Canada, a non-profit group.

Colla and Wazbinski are catching plenty of bumble bees – they netted nine different species one day near Peterborough, Ont. – but not a single rusty-patched bumble bee. The situation is only slightly better in the U.S., with researchers finding a few of the bees in Wisconsin and Minnesota this summer.

While most people can’t tell one species from another, bumblebees are not interchangeable.

Bombus polaris, which flits around the Arctic pollinating tundra flowers that produce wild berries, has thick pile on its body and can withstand long, dark, sub-zero winters.

The rusty-patched bee was the earliest bee to emerge in the spring in southern Canada and one of the last to stop foraging in the fall. It was also adapt at “nectar-robbing,” strategically slicing tiny holes in flowers to get at nectar not otherwise reachable with its short tongue, says Colla, who is working on the first field guide to the 42 species of bumble bees in North America.

Unlike honey bees that overwinter in their colonies, bumble bees live from just spring to fall with only queens surviving the winter.

Bumble bee queens emerge in the spring and forage alone for several weeks, replenishing their fat supply “just like a bear,” says Colla. The queen then makes a nest, often in a rodent burrow, and lays eggs to produce 100 to 200 workers over the summer to take care of the nest and forage for food. In late summer “new queens and kings” are produced and mate, says Colla. Fertilized new queens go into hibernation while the rest of the bees perish.

Worker bumble bees are common in the summer months and are not much bigger than honey bees. They are usually a combination of black, orange and yellow, unlike honey bees that have brownish bodies, says Colla, who can identify the different species at a glance.

She is also quick to spot the males, which don’t sting. She takes one from her net to demonstrate. The seemingly dazed male bee meanders across her palm and eventually takes flight.

Colla and Wazbinski may spend their time catching bees, but they have yet to be stung this summer. They are more concerned about ticks, poison ivy and thorny plants. “Walking into a field of thistle is no fun,” says Colla.

The demise of the rusty-patched bumble bee has been linked to several factors, but the mystery is far from solved.

One suspect is pathogens spread by commercial greenhouse operations that use bumble bees to pollinate tomatoes, cucumbers and other hothouse crops. The commercial bees are allowed to fly in an out of Canadian greenhouses, says Colla, who would like Canada’s hothouse industry to explore keeping its bees inside with screens, as has been proposed in Japan.

Potent pesticides, called neonicotinoids, which are widely used to kill bugs on crops and fleas on domestic pets, may also be associated with the demise of Bombus affinis. Recent European studies suggest the chemicals interfere with bees’ ability to navigate and find their way back to their nests.

Colla and researcher Jeremy Kerr at the University of Ottawa are looking into the possibility that climate change may have hit the rusty-patched bee hard.

Because the bee emerged so early in the spring and foraged until late fall, it was vulnerable to storms and weather extremes that have grown more pronounced in recent decades, says Colla.

Scientists say the loss of the bee may be impacting food chains and ecosystems. Bombus affinis was known to visit everything from raspberries and lilacs in the spring to goldenrod and asters in the fall. But they say it is difficult to pin down effects.

“I worry about the spring ephemeral flowers,” says Colla, noting the rusty-patched bumble bee was one of the few insects around to pollinate trilliums, trout lilies and spring lilies.

Packer says things are amiss when a species vanishes. And he says human society needs to become more attuned to the changes underway in the natural world.

In his book “Keeping the Bees,” Packer describes how bees around the world are at risk from habitat loss, pesticide use, disease and other factors. Because of the integral role the insects play in the ecology of the planet, he warns “we may be at risk as well.”

“It’s the small things that run the world.”