Posted by kenk on Tuesday, 18 September 2012 in Sustainable Development 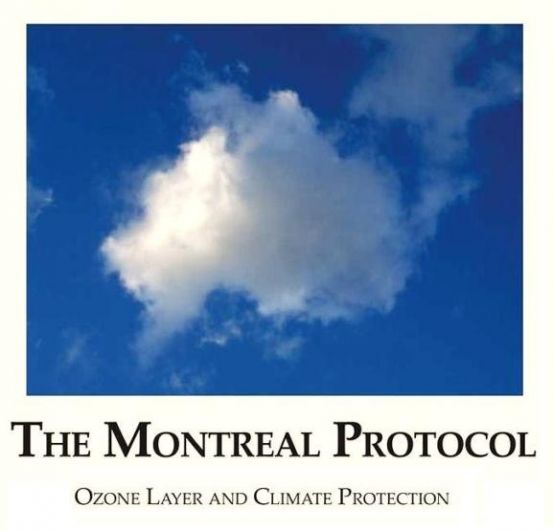 Washington, DC 14 September 2012 – The world’s most successful environmental treaty turns 25 this week on September 16th.  The treaty is the Montreal Protocol and its success has avoided one of the most severe global environmental threats the world has ever faced—the destruction of the stratospheric ozone by chlorofluorocarbons (CFCs).

“The Montreal Protocol has phased out nearly 100 kinds of CFCs and related fluorinated gases by 98%, an astonishing record by any measure,” stated Durwood Zaelke, President of the Institute for Governance and Sustainable Development.  “The treaty’s success has put the ozone layer on the path to recovery by 2065 or later, and has avoided millions of deaths from skin cancer and trillions of dollars in health costs.”

At the same time, because the CFCs and other chemicals that destroy the ozone layer also cause global warming, the Montreal Protocol has provided nearly 20 times more in climate mitigation than the Kyoto Protocol climate treaty has done in its first commitment period.

“Including the earlier consumer boycotts of CFC-filled spray cans and the early national laws in the US and Europe to cut these chemicals, the combined efforts to address CFCs and related chemicals has solved a part of the climate problem that otherwise would be as big as the part caused by carbon dioxide today.  (Carbon dioxide causes more than half of the warming.)  Put another way, the global temperature above pre-Industrial average would be 50% again as high as it is today.”

“The Montreal Protocol is successful because it has universal membership of all UN countries.  And it has universal membership because all countries consider the treaty to be fair,” Zaelke noted.  “They consider it fair because it fully implements the principle of ‘common but differentiated responsibility,’ by providing that the developed countries that first used CFCs start their phase outs first, followed by a grace period of ten years, before the developing countries have to start.”

Developed countries also provide a dedicated funding mechanism to pay the full, agreed incremental costs to the developing countries for making the transition out of the banned chemicals.  There also is funding to pay for national ozone officers in all 147 developing countries, and to provide for regular training.  “These boots on the ground have made a tremendous contribution to the treaty’s success,” added Zaelke.

Today a coalition of developing and developed countries are proposing to amend the treaty to phase down hydrofluorocarbons (HFCs) that have high global warming potential.  A group of 108 countries are now supporting this, although India and China are not yet on board.

“The reluctance of these two countries is blocking the world’s single biggest and fastest bite out of the climate problem,” added Zaelke.  “Both China and India have always joined the Montreal Protocol consensus over the past 25 years, and we fully expect that they will join the consensus to phase down HFCs as well.  They don’t want to be blamed for increasing the near-term climate impacts that the Montreal Protocol can avoid.”

“Phasing down HFCs now is especially important,” Zaelke continued, “because the climate treaty is on a deliberate schedule, aiming for an agreement by 2015 on new mandatory commitments in a treaty that would go into effect by 2020.  This is too late to avoid the catastrophic impacts that are getting closer each day.”