Posted by bchristo on Tuesday, 23 August 2011 in Wildlife Conservation 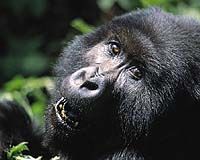 Viewers of this summer’s Hollywood blockbuster “Rise of the Planet of the Apes” may be surprised to learn that before our earliest ancestors arrived on the scene roughly seven million years ago, apes really did rule the planet. As many as 40 kinds roamed Eurasia and Africa between 10 and 25 million years ago. Only five types remain. Two live in Asia, the gibbon and orangutan; another three, the chimpanzee, bonobo and gorilla, dwell in Africa. All five are endangered, several critically so. All may face extinction.

A decade ago, Congress stepped forward with a relatively cheap but vitally important effort to protect these apes through innovative conservation programs in Africa and Asia that combined taxpayer dollars with private money. But attempts to reauthorize the Great Apes Conservation Fund have gotten stuck in Congress and may become a victim of the larger debate over the national debt.

Hollywood’s depiction of apes as cunning — if not conniving — creatures comes close to reality. Fifty years ago, Jane Goodall’s observations of chimpanzees’ using tools and eating meat demonstrated just how similar apes are to humans. Subsequent fieldwork has underscored this point.

Gibbons, long thought to be monogamous, occasionally mate with individuals outside their group. Orangutans fashion tools to extract seeds that are otherwise difficult to obtain. Gorillas engage in conversational vocal exchanges. Bonobos appear to have sex not only to reproduce but also to relieve stress. Male chimpanzees form coalitions to kill their neighbors and take over their territory. If all of this seems human, there is a good reason: The apes are our closest living relatives, and in anatomy, genetics and behavior, they are much more similar to us than they are to other animals.

Apes fascinate and captivate us like no other species. They are prime attractions at zoos, and scientists from disciplines ranging from anthropology to biology and psychology study them closely in captivity and in the wild. As our first cousins in the primate family, apes help us to understand what makes us human.

I have been lucky to study all five kinds of apes during 33 years of fieldwork in Africa and Asia. When I look into the eyes of an ape, something stares back at me that seems familiar. Perhaps it is a shock of recognition, or a thoughtfulness not seen in the eyes of a frog, bird or cat. The penetrating stare makes me wonder, “What is this individual thinking?”

But as the human population expands, ape numbers continue to dwindle. In previous versions of the “Planet of the Apes” films, greed and consumption by humanlike apes threatened the world. In reality, it is these all-too-human traits that imperil apes.

Habitat destruction because of human activity, including logging, oil exploration and subsistence farming, is the biggest concern. Hunting is another major problem, especially in West and Central Africa, where a thriving “bush meat” trade severely threatens African apes. Poachers are now entering once-impenetrable forests on roads built for loggers and miners. Recently, periodic outbreaks of deadly diseases that can infect humans and apes, like Ebola, have begun to ravage populations of chimpanzees and gorillas.

The Great Apes Conservation Act, enacted in 2000, authorized the spending of $5 million annually over five years to help protect apes in the wild. The act was re-authorized in 2005 for another five years. The program matches public with private dollars to maximize the impact. Since 2006, for example, $21 million in federal dollars spent by the Great Ape Conservation Fund generated an additional $25 million in private grants and support from other governments.

The federal money may not sound like much in this era of “big science.” But those dollars have gone a long way to protect apes in countries that are desperately poor and politically volatile. The money pays for protecting habitat, battling poachers and educating local populations about the importance of these apes.

For instance, in Indonesia, where habitat loss threatens the few remaining populations of orangutans, money has been earmarked to block the conversion of forests to commercial oil palm and rubber plantations. In Congo, home to the extremely rare mountain gorilla, alternative fuels have been introduced to discourage the cutting of forests for charcoal production. In Gabon, the program has paid for law enforcement training for park rangers battling poachers. The list goes on. In all, last year, the Great Apes Conservation Fund helped to underwrite more than 50 programs in 7 Asian and 12 African countries. If Congress does not reauthorize the act, it could make it much harder to continue even the modest appropriations the great apes fund now receives.

A planet without apes is not sci-fi fantasy. If we do not take action now, sometime in the future, as Hollywood continues to produce sequels to the classic 1968 film, our children and our children’s children will ask with wonder, and perhaps a certain amount of anger, why we stood by idly while these remarkable creatures were driven to extinction.