Posted by Angel on Friday, 11 May 2012 in Wildlife Conservation 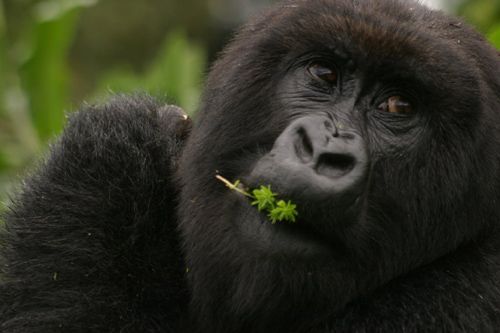 Hidden high among the forested volcanoes of central Africa, the mountain gorilla was unknown to science until 1902, when two were first encountered by a German explorer -- and promptly killed.

It set the tone for the relationship. For much of the time since, due to deforestation and poaching, it has seemed the mountain gorilla was swiftly destined to be lost to the world again. Not long after the species' greatest champion, the American zoologist Dian Fossey, was killed in Rwanda in 1985, there were fewer than 300 of the giant primates left in the wild.

These days, however, while the species remains endangered, their numbers have grown to nearly 800. This is due to the efforts of conservationists such as those working in Volcanoes National Park, in northwest Rwanda, where Fossey established a research center which continues to run in her name today.

Efforts to change attitudes towards the mighty animals have seen them become an important source of income for the local economy through the tourists they bring, and turned poachers into vocal advocates for conservation.

The world's largest mountain gorilla population, thought to number less than 500 animals, is found in a mountainous region known as the Virungas, incorporating Volcanoes, Uganda's Mgahinga Gorilla National Park, and Virunga National Park in the Democratic Republic of Congo. A second, smaller population can be found in the Bwindi Impenetrable National Park, in another region of Uganda.

The Karisoke Research Center, operated by the Dian Fossey Gorilla Fund International and located in Volcanoes National Park, is the world's most important facility for studying the mountain gorilla.

"In order to stop all this ... poaching, deforestation or any other illegal activities, it was a combined effort of the former Rwanda National Parks and Tourism Office and the current Rwanda Development Board (RDB)," he said. "The RDB met us and gave us a plan of action and showed us how we can live without poaching in the parks."
Vecellio said one of the amazing things about studying mountain gorillas was how close the primates let observers come to them, compared to other species she had studied.
"I started with western lowland gorillas, and the top distance was 50 meters to have them doing their activities," she said. "But here you can approach a gorilla very close, and they ignore your presence ... you can be there and just be a natural part of the forest and collect your data."
http://www.cnn.com/2012/04/13/world/africa/mountain-gorillas-rwanda-inside-africa/index.html
Tagged in: Dian Fossey mountain gorilla primates Rwanda Uganda