Gardening on the Roof

NEWARK -- On a warm fall day in 2008, Annette Shine sat in a classroom teaching a course she likes to call "how not to blow up a chemical plant."

Her group of University of Delaware chemical engineering students struggled to learn the difficult material in a sweaty, 86-degree room.

The building's ventilation system had been switched over to heat for the winter, so forget about air conditioning. Shine opened a window, but construction nearby made too much noise. So she and her students treated it as an engineering problem, and eventually, they came up with a solution. 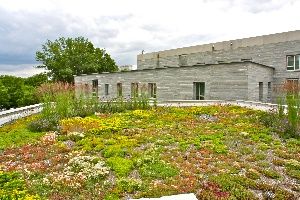 Grow a garden on the roof.

This fall, people looking over a one-story wing jutting out from the south side of Colburn Laboratory will see an array of colorful plants covering the flat tar roof.

The 14,000 square feet of small sedums planted in trays with 4 to 8 inches of soil will be UD's first "green roof."

"There was no good way to cool the building if it got hot certain times of the year," said Shine, an associate professor. "And it's a popular classroom even though it can be uncomfortable, so this will help."

Rooftop vegetation has sprouted on campuses across the country, from community colleges to Ivy League institutions. Nearby Swarthmore College, a liberal arts school in Delaware County, Pa., has more than 14,000 square feet of plants covering the tops of its buildings.

They've been used on commercial buildings as well, said Chad Nelson, an assistant professor of landscape design who has been studying the function and aesthetics of green roofs. Nelson said green roofs have caught on at colleges because much of the work and preparation can be done by faculty and student volunteers.

The plants act as a natural heat shield, absorbing and deflecting the sun's radiation. On a hot day, Shine and her students predict, the plants will lower the temperature inside the building by about 5 or 6 degrees. That might not sound like a lot, Shine said, but it could make the difference between stifling and tolerable.

Recent temperature readings on the roof have revealed a greater benefit. Aside from cooling Colburn, the plants cause the peak temperature on the roof to occur later in the day. Instead of the high heat of the day radiating into the rooms at around 1:30 p.m., it will be delayed until 3:30 or 4 p.m. in places where the soil is 4 inches deep and around 6:30 p.m. where the dirt is 8 inches thick.

"That could be very useful to us because we don't have that many classes at that time of night," Shine said.

Even after coming up with the solution, Shine was not optimistic a rooftop garden could actually happen. But one of her doctoral students at the time, Kathy Phillips, was passionate about the possibility. The two brought the concept to a green expo on campus. Shine said word then reached the dean of the College of Agriculture and Natural Resources, Robin Morgan, who knew Nelson wanted to pursue a green roof project.

"It's those combined benefits that really make it worth it," Nelson said. "For any practical benefit of a green roof, you can do the same thing with another material."

After some study, Nelson chose durable plants that grow year-round and require little attention beyond some occasional weeding. The skills of Nelson and Shine offered the ultimate contrast and complement of practicality and creativity.

"We provided sort of the practical, rational aspect of the green roof, and we would joke that Chad was the artist," Shine said.

The new Interdisciplinary Science and Engineering Laboratory, currently under construction on Academy Street, is being built to accommodate a green roof. Nelson hopes the visibility of the Colburn Lab project will inspire more greening elsewhere in the university.

"We wanted the first one to be in a visible place to kind of market it to the rest of campus," Nelson said.

The process was not without its challenges. It required a structural engineering study to ensure the roof wouldn't collapse under the weight of the garden, and facilities personnel wanted assurances that the plants would not become a maintenance hassle. Shine credited the students for helping her through the long process.

"Chad and I provided continuity, but the students did a lot of the legwork," she said.