Posted by bensor on Monday, 17 October 2011 in Animals 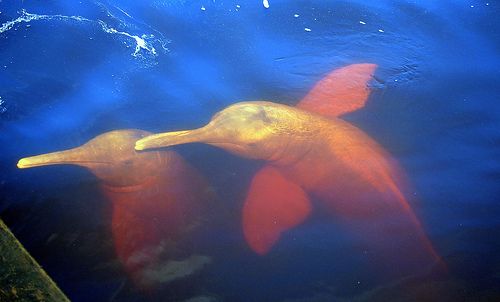 Of all the remarkable species that inhabit the Amazon river basin, few are as iconic or as threatened as Amazon river dolphins. For decades, the pinkish hued dolphins have been targeted by fishermen who view the skilled aquatic hunters as competitors for food -- leading to thousands of the animals to be poached every year by villagers, who often then use their meat as bait. But despite a campaign to save the river dolphins, researchers say that they're continuing to be killed at a troubling rate -- with some populations showing a decline of 10 percent annually.

According to recent studies conducted by researchers from the National Institute of Amazonian Research (INPA) the troubling rate of decline in Amazon river dolphins, sometimes called Pink dolphins for their rosy hue, is due to an increase in villagers poaching the animals for use as fishing bait. Under current estimates, experts believe nearly 3 thousand dolphins are killed each year out of a total population of around 30 thousand animals.

This week, several Amazon conservation organizations will meet in Brazil to discuss what actions can be taken to prevent the continued slaughter of this elusive, yet threatened species.

"This dolphin native to our region has been cruelly slaughtered for use as bait in fishing for catfish, like piracatinga. It is for this reason we want to establish a process that results in the development of effective action to eliminate this cruel and unsustainable activity in the region," Vera da Silva of the INPA said in a released statement.

In a report from the Associated Press published last year, biologists estimated the rate of decline in Amazon river dolphins to be at 7 percent annually, suggesting a sharp spike in poaching for 2011. The article cites a lack of focus on the part of government agencies to combat the problem, along with the economic incentives of poaching garnered by local fishermen.