Posted by bchristo on Monday, 17 October 2011 in Solar 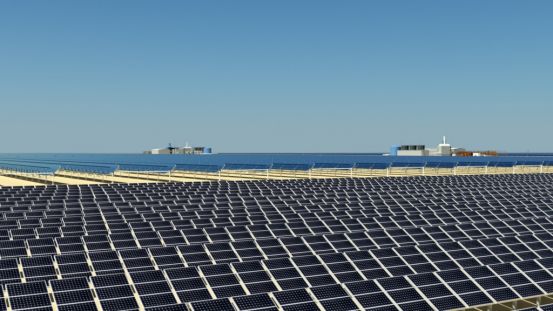 EDWARDS AIR FORCE BASE, Calif. -- With today's fiscal climate, Edwards Air Force Base is always looking for good ways to save money.
One area where Edwards is looking to save is energy costs.
After three years of planning and coordination with Southern California Edison, the California Public Utilities Commission and environmental agencies, workers are now building solar farms on base.

In an agreement with Borrego Solar, a company headquartered in El Cajon, Calif., the base is constructing three solar farms that could potentially save the flight test center hundreds of thousands of dollars.
"This project was brought to the base through a federal program named Power Purchase Agreement," said Yusuf Ahmed, 95th Civil Engineering electrical engineer. "There is a third party that is chosen to build a renewable energy source on the base and they are the ones who fund all the installation. The agreement is we purchase the power from them."
Edwards will buy the electricity from Borrego, which is building the plants.
"Our utility bills for the summer actually double, but our consumption only goes up three percent," said James Judkins, 95th CE director. "What we're trying to do (with this project) is not so much conserve energy, but save money."
"We're going to build these solar plants on our side of the meter. When the sun is up, and the plants are generating power and feeding it to us, we won't have to pay Southern California Edison some of the high-demand charges from June through September," Judkins said.
One solar farm is located near Wolfe Avenue and Lancaster Boulevard, one is just off Rosamond Boulevard near the north gate and one is at the Air Force Research Laboratory Detachment 7.
The locations were chosen because of the electricity substations located at each site. Once completed, the lines from the solar panels will be connected to Edwards' power grid.
Ahmed said the base power requirement is 30 megawatts at its peak, and the three solar farms will provide one megawatt each to the grid.
The 95th Air Base Wing worked closely with the 412th Test Wing and Air Force Flight Test Center to ensure the project does not interfere with the test mission.
Judkins said another cost-saving initiative underway is an enhanced-lease agreement where Edwards will lease a portion of land to a company that will build more solar units. The money from the lease would be reinvested into the base infrastructure and into other energy-saving programs, he said.
If funding is approved another project will be solar parking, where panels will be installed on the roofs to generate electricity, he said.
"Our utility bill can range anywhere from $15 million to $18 million a year and you have to pay that bill. If you don't have the electricity, the planes don't fly."
The current solar farm construction is expected to be completed around the end of the year.
With October being Energy Awareness Month, 95th CE will be setting up displays in certain buildings throughout the month to create awareness about saving energy.