Posted by grant on Tuesday, 12 July 2011 in Wildlife Conservation

SAINT HELIER, Jersey (AFP) – Japan and the anti-whaling group Sea Shepherd on Tuesday swapped angry words at the world whaling conference here over the hunting of cetaceans around Antarctica.

Showing video footage of high-sea confrontations, Kagawa called on Australia and The Netherlands, which let Sea Shepherd register its ships under their flags and dock in their ports, to block the campaigners.

The two countries should "take adequate measures to stop their actions and ensure that they do not start again," said Kagawa. 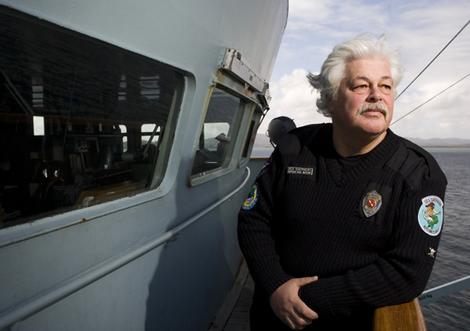 But Sea Shepherd skipper Paul Watson vowed to continue harassing Japanese whalers if they returned to the Antarctic sanctuary later this year.

"We are trying to find out what Japan's intentions are," he told AFP on the sidelines of the annual meeting of the IWC, which oversees both the hunting and the protection of cetaceans.

"It doesn't make any economic or political sense for them to go back," he added, seated aboard the trimaran Brigitte Bardot, docked at Saint Helier on the British Channel Island of Jersey.

The former French movie star and animal-rights activist contributed to the brand-new vessel, which was launched in May.

The IWC has banned all types of commercial whaling in the Southern Ocean Whale Sanctuary, a vast area of sea surrounding the land of Antarctica.

Japan conducts whale hunting there for what it describes as "scientific research", setting self-determined quotas averaging about 1,000 whales each year over the last five years.

The killing is permissible under the IWC rules, but other nations and environmental groups condemn it as disguised commercial whaling.

In February, Japan recalled its Antarctic fleet a month ahead of schedule with only one fifth of its planned catch, citing interference from Sea Shepherd's vessels.

The 89-nation IWC, roughly evenly split between pro- and anti-whaling nations, is meeting until Thursday.

Watson said the hardship caused by the March 11 earthquake and tsunami, which left nearly 28,000 people dead or missing, would not cause him to soften his stance or change his tactics.

"If there were an earthquake in Colombia, would we be less hard on cocaine smugglers?" he asked.

"The fact is, Japan's whaling is illegal, so just because there is a natural disaster in Japan is no reason for us to stop opposing their illegal activities in the Southern Ocean."

"Our objective right from the beginning was to sink the Japanese whaling fleet economically, to bankrupt them," he added.

Separately, Atsushi Ishii, a Tokyo University professor and author of "Anatomy of the Whaling Debate", said Japanese were increasingly shunning whale meat as they accepted ecologists' arguments to protect the giant mammals.

"Whale meat has not been selling well in Japan for years. The reality is that the whaling industry doesn't want more meat," he said in an interview with AFP.

Frozen stocks of whale meat stand at more than 6,000 tonnes, enough to keep the country in supply at current consumption rates for 18 months, he said.

But, Ishii contended, aggressive campaigning by Sea Shepherd and other activists prompted a backlash among the public, which did not want to feel bullied.

He argued that the Japanese government was seeking a way to curtail whaling in Antarctic waters, but could not be seen to be yielding to foreign pressure.

"If we pull out of Antarctica, it would be perceived as a total loss against the anti-whaling organizations. Politicians are not eager to accept that," he said.