Posted by bchristo on Saturday, 03 September 2011 in Earth Violators 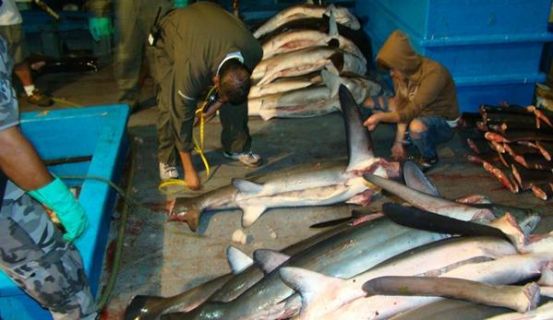 On July 25th, Sea Shepherd reported the capture of a fishing vessel in what is the biggest case of shark killing in the history of the Galapagos National Park. We saw this as our opportunity to put almost two years of hard work in our legal project into practice and were preparing ourselves to go to court as an accusing party in defense of the massacred sharks. It was going to be historic, as there is no prior record of non-governmental organizations (NGOs) prosecuting environmental cases in the Galapagos. But, we were too optimistic as the Galapagos legal system is incapable of dealing with environmental crimes. In fact, we wonder if the local legal system is even capable of handling any crimes at all. In the 13 years of environmental regulations in the Special Law of Galapagos, not a single conviction has ever followed an environmental crime. We now know why: it is simply impossible under the present judicial conditions.

The facts of the Fer Mary 1 case:

-          The Fer Mary 1 is an industrial fishing vessel, using longlines, registered in Manta, the main fisheries port of Ecuador.

-          The Fer Mary 1 was detected by the Vessel Monitoring System (VMS), on July 18th 2011. VMS is used by the Galapagos National Park Service (GNPS) to monitor vessel movement inside the Galapagos Marine Reserve (GMR).

-          The GNPS sent a speedboat to intercept the vessel that was operating some 20 NM inside the GMR. This speedboat had six rangers and one navy member. They sailed under difficult sea conditions to do their job. The seas were so rough that the GNPS took a big risk.

-          A large number of sharks (357) of different species, including one mako, a protected species by the Convention on Migratory Species, were found in the vessel and its dependant minor vessels. Some of these species are also listed on the International Union for the Conservation of Nature’s (IUCN) red list as either endangered or threatened. In Galapagos ALL species of sharks receive full legal protection.

-          According to the Galapagos Law and the Criminal Code of Ecuador, any capture of sharks, is illegal within the GMR. Any industrial fishing, especially using longlines, is also illegal inside the GMR.

-          On July 19th, the environmental prosecutor of Galapagos opened an investigation on the environmental crimes of fishing within the GMR and capturing protected species against the crew ofFer Mary 1. Upon request of the prosecutor, the judge ordered the detention of all crewmembers. The GNPS also filed an accusation.

-          If convicted, the crew of the Fer Mary 1 can all get up to three years imprisonment for fishing illegally and an additional three years for capturing protected species.

-          On August 3rd upon request of defendant’s attorney, a judicial hearing took place. Despite the prosecutor’s formal opposition, the judge decided on Saturday August 6th to release all suspects on the condition they report to the judge in Manta, their hometown on the mainland, every eight days. This condition applies to 19 crewmembers, which have left the islands and are now enjoying freedom 982 km away from the crime scene. Only the captain and the chief engineer, have to stay in Galapagos on San Cristobal Island until the end of the preliminary investigation, which is the first stage of the criminal procedure.

-          From a litigation perspective, the case has no future, as most suspects are out of town. This means that all of the risks taken by park rangers and the navy crew, implementation of expensive satellite monitoring technology, and all of the work of the environmental prosecutor and the GNPS was worth nothing to the judicial system, as suspects are now 982 km away from the Galapagos Islands. In reality, real justice is meant to respond to society and to protect it, not to abandon it.

-          And yet, it gets even worse: If charged with environmental crimes, all suspects will have to come back to Galapagos for trial. This has never happened in previous cases. The Papate is a good example. In April 2010, this Ecuadorian industrial fishing vessel was also caught inside the GMR with 183 dead sharks onboard. Five times the court in Galapagos has asked the 14 defendants, who are also from Manta, to return to Galapagos for their court case. The last time only one of them complied. In order for the court to process the case, ALL defendants must be present.  If the defendants fail to show up, the police have the authority to detain them and transport them to the court. This happens on the continent BUT in the case of Galapagos the question emerges: who will pay the costs of transportation from the mainland to the islands? Neither the police nor the judicial system has the budget for this. It is also not clearly regulated in the law.

-          Even if suspects do return, it is already certain that the case will be nullified: in the first environmental case that ever went to trial in Galapagos, the local criminal court has declared itself not competent to address cases on environmental crimes. That means that if you want to prosecute somebody in Galapagos, you have to go to the nearest provincial court in Ecuador, some 982 kilometers away. This is unbelievable and simply unacceptable.

-          Even more unacceptable is the fact that Galapagos is the only province in Ecuador without a Provincial Court of Justice.  How can this all happen in such a unique place as Galapagos?

Further notes of interest regarding the Fer Mary 1 case:

-          The vessel is being detained in Galapagos. History has shown that the owners will unlikely get it back (small bit of good news).

-          The prosecutor has also started a case against the owner of the vessel, a positive and new strategy to push the case to its limits. However, the same applies here as with the other defendants of previous cases: if one fails to show up, none can be charged.

-          The judicial system needs to be completely sanitized. Sea Shepherd Galapagos has helped achieve great improvements but as it turns out we haven’t even scraped the surface in this area. The environmental prosecutor is doing a great job but is running against the judicial wall.

-          The GNPS is able to capture illegal fishermen thanks to the already existing VMS and soon with help of the Automatic Identification System (AIS) that Sea Shepherd is installing. The park rangers do this under difficult sea conditions taking big risks in order to protect the GMR. It is very frustrating for the rangers to then see the case being lost due to a failing judicial system.

-          The judge ordered the release of the fishermen due to humanitarian reasons. He thought it unfair to incarcerate people for a "mere" environmental infraction. But what about the terrible environmental damage that was inflicted upon this fragile ecosystem? What about breaking the law, doesn’t that count for something? Apparently in Galapagos, nature is not as important to the judicial system.

-          The judge who ordered the release was removed from his position, days after he made this decision.

Next steps of action to correct this unacceptable situation:

-          Complete, in depth sanitation is needed of the judicial system in Galapagos. Competent judges need to be appointed who understand the value of the Galapagos’ delicate ecosystem.

-          If the court in Galapagos is not competent to address cases on environmental crimes, than a provincial court should be appointed in Galapagos.

-          Where it is clear that the local judiciary does not understand the ecological value of sharks, at least it should be make clear to them that the economical damage to Galapagos far exceeds the profits of illegal fishermen. Some 90% of the people in Galapagos are dependent on tourism of which dive tourism is a very important part. People come to Galapagos to see sharks, not to see sharks being butchered by illegal fishermen.

-          Cases need to be treated on a person-to-person basis. Instead of trying to get all crewmembers back at the same time (which has proven to be impossible), the courts should prosecute each person individually. Not only will this be a lot easier, it also prevents all cases to be delayed if only one person fails to show up. This method is being applied in other parts of Ecuador where it has been proven to work. Due to the logistical difficulty Galapagos faces, as well as the lack of a provincial court, this should be an option.

Next steps of action for Sea Shepherd Galapagos:

This unlawful shark massacre will not be forgotten, and we will make sure of it. Sharks were killed in a shark sanctuary where they receive full protection, even though the judicial system fails to understand that.

This case has become the very symbol of a failing judicial system in Galapagos. If this judiciary is ever to become what it should be, a knowledgeable and respected actor in delivering environmental justice, then urgent and full transformation is needed.

At the moment, a process of judicial transformation is underway in Ecuador. We need to show national judicial authorities just how poorly environmental justice is being delivered in Galapagos. The Fer Mary 1 case will not bring the 357 dead sharks back to life, nor does it pay justice to the hard work of all the local authorities involved, but it may just be THE case justifying the need for major, local judicial transformation.

A legal brief (amicus curiae) on the need to protect sharks will soon be filed in court. Local and national support is being asked in order to send a clear message to the judicial system on how upsetting this case has become to society.

Two years ago we succeeded in showing national authorities the need of a specialized environmental prosecutor for Galapagos, and now, we turn our efforts to the judiciary.

It is about time for Lady Justice to come back to Galapagos.