Posted by bensor on Wednesday, 31 August 2011 in Environmental Heroes 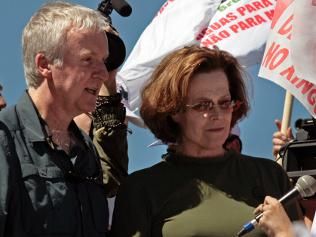 Timed with the re-release of the blockbuster film Avatar in theaters last week, director James Cameron has joined forces with Amazon Watch to get the word out about "A Message from Pandora" and the battle to stop the Belo Monte Dam on the Xingu, one of the great tributaries of the Amazon River.

"A Message from Pandora" is a special feature produced by James Cameron about a Brazilian Indigenous' movement to stop the damming of the Xingu river and the flooding of indigenous villages.

"Here were people whose lives were going to be altered irrevocably, whose communities were going to be destroyed, literally put under water, or affected negatively as the river's flow would change," said Cameron. "For these people, it's the end of their world, as they know it. And they're reacting accordingly. They are there with their spears and their bows and arrows, saying that they will fight..."

Atossa Soltani, Executive Director of Amazon Watch noted the urgency for action: "Just yesterday, the Brazilian government signed the contract to build the dam, ignoring warnings about the project's serious ecological, financial and technical risks," said Soltani. "We invite Avatar fans in Brazil and around the world to stand with the people of the Amazon and persuade Brazilian authorities to opt for greener and less damaging energy alternatives."