Posted by Wolf on Wednesday, 01 June 2011 in Earth Violators

MOBILE, AL (WEAR/CNN) - Marine researchers say the BP oil spill may have played an indirect role in the unusual number of dolphin deaths along the Gulf Coast.

The researchers said the dispersants used to clean the oil may have disrupted their food chain.

"I used to say I had the best job in the world; you couldn't even call it a job because people paid me to take them out to see dolphins, but now, it's a different turn," said boat captain Lori Deangelis with Dolphin Queen Cruises. 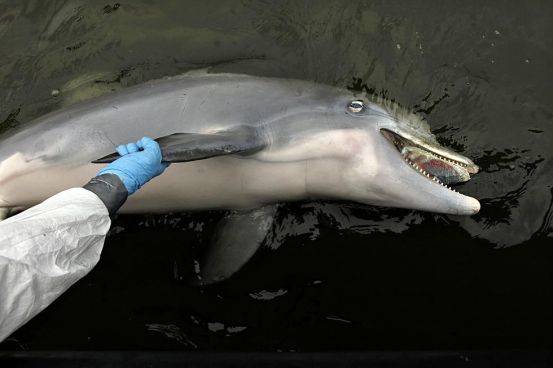 Since January, more than 150 bottle nosed dolphins have been found dead along the coast of the Gulf of Mexico.

Marine researchers are saying the BP oil spill may be preventing the mothers from building insulating blubber they need to withstand the cold.

Captain Tom Eberly with Cold Fleet Cruises said he thinks their food chain also may have been disrupted.

"Because of the oil spill, all the commercial fishing was shut down for a year and people outside the industry don't realize how much the dolphins depend on that for food," Eberly said.

The U.S. Justice Department is using dolphin testing in its investigations into the oil spill. However, wildlife biologists were ordered in February to keep their findings confidential.

"It has to be that way because the numbers of the deceased dolphins now has gotten up to such a level where that this is now part of a crime scene," Deangelis said.

The boat captains say they'll never the cause of the dolphin deaths until the lab results are released.

Until then, they said their biggest fear is their ticket sales will continue to decrease.