Posted by henryfool on Wednesday, 01 June 2011 in Oil Spill 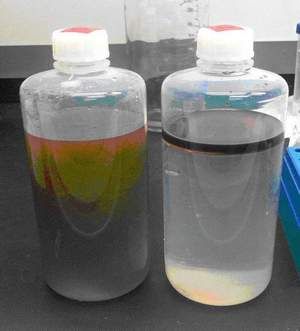 The chemical sprayed in the Gulf to break up the BP oil spill may not have been effective and could be damaging the ecosystem more than the oil alone, according to preliminary findings by University of West Florida researchers. When mixed with oil, Corexit, the chemical dispersant used by BP, is toxic to phytoplankton and bacteria — crucial elements in the Gulf of Mexico's fragile food chain, said Wade Jeffrey, a UWF biologist with the Center for Environmental Diagnostics and Bioremediation. "That (effect) may cascade itself up through other larger organisms as you go up the food web," he said Tuesday. "It's one of those small pieces of a big puzzle of effects. We can't say if we've seen big shifts yet. I don't know that answer yet." Jeffrey was one of several scientists who presented preliminary research findings last week at a Florida Institute of Oceanography conference at the University of Central Florida.

BP dumped nearly 2 million gallons of the so-called dispersant chemicals in the Gulf, which saw more than 172 million gallons — 4.1 million barrels — of oil leak into the water in the wake of the April 20 Deepwater Horizon explosion.

Jeffrey and his researchers found in experiments that BP oil treated with Corexit broke down in seawater, coloring it brown and causing it to become more absorbed in the water.

BP claimed that the chemical would break up the oil and allow naturally occurring bacteria in seawater to eventually gobble up the harmful hydrocarbons.

"What we found in a couple of experiments is that when Corexit is included in the treatment it does not speed up the degradation of the hydrocarbons ...," he said. "it might have been better to not use it because it greatly increases the oil that is dissolved in the water instead of concentrating it at the top."

Jeffrey and other researchers are being funded by a $10 million grant provided by BP to study the oil's effects on the Gulf Coast's ecosystem.

Jeffrey said samples were taken from the waters around the state of Louisiana which saw the highest impact, from Pensacola which saw some, but not nearly as much oil, and from Apalachicola as an unpolluted control.