Snow melt in the Colorado River basin is occurring earlier, reducing runoff and the amount of crucial water available downstream. A new study by NASA/UCLA shows this is due to increased dust caused by human activities in the typically arid American southwest region during the past 150 years. 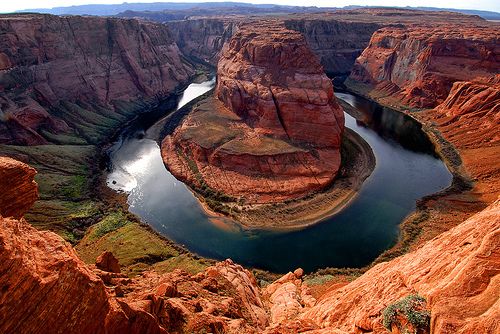 The Colorado River is a river in the Southwestern United States and northwestern Mexico which is approximately 1,450 miles long. The natural course of the river flows from the Continental Divide at La Poudre Pass in Colorado, into the Gulf of California between the Baja California peninsula and mainland Mexico.

The watershed of the Colorado River covers 246,000 square miles in parts of seven U.S. states and two Mexican states.

So the Colorado River and how it performs has a major impact on all who live in this area and use the water.

The research team studying changes in the Colorado River was led by Tom Painter, a snow hydrologist at NASA's Jet Propulsion Laboratory in Pasadena, Calif., and an adjunct professor in the UCLA Department of Geography. The team examined the impact of human produced dust deposits in mountain snow packs over the Upper Colorado River basin between 1915 and 2003.

Studies of lake sediment cores showed the amount of dust falling in the Rocky Mountains increased by 500 to 600 percent since the mid- to late 1800s, when grazing and agriculture began to disturb fragile but previously stable desert soils.

The team used an advanced hydrology model to simulate the balance of water flowing into and out of the river basin under current dusty conditions and those that existed before the soil was disturbed. Hydrologic data gathered from field studies funded by NASA and others as well as measurements of the absorption of sunlight by dust in snow were combined with the modeling.

More than 80 percent of sunlight falling on fresh snow is typically reflected back into space. In the semi-arid regions of the Colorado Plateau and Great Basin, winds blow desert dust east into the Rocky Mountains where the snow pack is located. Dust will tend to make the snow darker and thereby reducing the snow's ability to reflect sunlight. Dark snow absorbs more sunlight and consequently melts faster and earlier.

The study shows that an annual average of approximately 35 billion cubic feet of water that would otherwise feed the Colorado River is lost from this exhalation and the overall evaporation.

The study showed peak spring runoff now comes three weeks earlier than before the region was settled and soils were disturbed. Annual runoff is lower by more than 5 percent on average, compared with pre-settlement levels.