Posted by EarthDude on Wednesday, 25 May 2011 in Climate Change

A new study aimed at refining the way scientists measure ice loss in Greenland is providing a "high-definition picture" of climate-caused changes on the island. And the picture isn't pretty. In the last decade, two of the largest three glaciers draining that frozen landscape have lost enough ice that, if melted, could have filled Lake Erie. 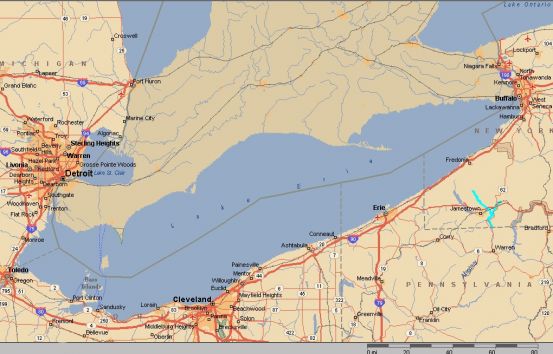 The three glaciers -- Helheim, Kangerdlugssuaq and Jakobshavn Isbrae -- are responsible for as much as one-fifth of the ice flowing out from Greenland into the ocean.

"Jakobshavn alone drains somewhere between 15 and 20 percent of all the ice flowing outward from inland to the sea," explained Ian Howat, an assistant professor of earth sciences at Ohio State University. His study appears in the current issue of the journal Geophysical Research Letters.

As the second largest holder of ice on the planet, and the site of hundreds of glaciers, Greenland is a natural laboratory for studying how climate change has affected these ice fields.

Researchers focus on the "mass balance" of glaciers, the rate of new ice being formed as snow falls versus the flow of ice out into the sea.

The new study suggests that, in the last decade, Jakobshavn Isbrae has lost enough ice to equal 11 years' worth of normal snow accumulation, approximately 300 gigatons (300 billion tons) of ice.