Oceana turned its press conference yesterday at the National Press Club into a pop quiz: Organizers laid out skinless fillets of halibut next to skinless fillets of fluke, both without labels, and then asked the gathered audience to identify each fish by sight. Oceana then repeated the test for red snapper vs. hake and for farmed vs. wild salmon. 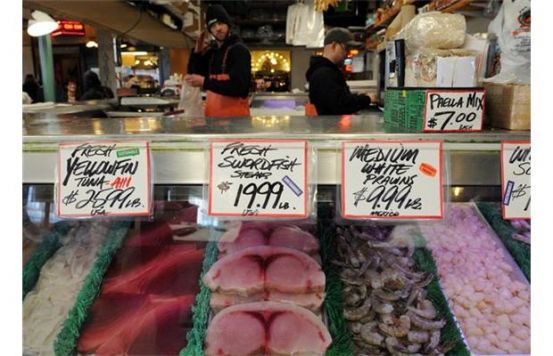 A few people got it right, said Beth Lowell, campaign director and federal policy director at Oceana. But, she added, “for the most part, everyone said, ‘We couldn’t tell’.”

A taste test between tilapia and vermilion snapper, both draped in a lemon caper sauce, produced similarly poor results from the audience.

The point was clear: It’s easy to dupe Americans on fish.

“We don’t expect people, when they’re ordering meat, to have to guess whether it’s beef or horse or whale or Grade A prime or dog grade,” noted Mike Hirshfield, chief scientist for Oceana. “And yet with fish, where there is many more choices, we do the exact opposite.”

Oceana’s press conference was to announce its new campaign to fight seafood fraud, which is rampant.

According to Oceana’s new report, “Bait and Switch,” “[C]onsumers are frequently served the wrong fish — a completely different species than the one they paid for. Recent studies have found that seafood may be mislabeled as often as 25 to 70 percent of the time for fish like red snapper, wild salmon and Atlantic cod, disguising species that are less desirable, cheaper or more readily available (Miller and Mariani 2010, Buck 2007, Jacquet and Pauly 2008).”

A nearly perfect set of conditions exist to promote fraud, Oceana believes. For starters, global consumption of seafood is on the rise, which has increased demand as well as the price for fish. Everyone along the supply side of the seafood chain wants to capitalize on the high prices, so they have incentives to both overfish the seas and mislabel their products as the more premium species, such as red snapper and tuna. The nonprofit notes that more than 80 percent of seafood is now imported, and that fish processing, which turns whole fish into fillets, makes it almost impossible for agencies to detect the fraud without DNA testing.

There are numerous problems inherent with fish fraud, some economic and some environmental, Hirshfield said. Fraud encourages fishermen to further mine the oceans for seafood, contributing to already-depleted stocks. Fraud also penalizes seafood companies that correctly label their fish and then find themselves undercut by importers that offer so-called identical fish for far less. Then there’s the health issue.

“You know you are allergic to fish, and you think you’re eating crab, and it turns out to be pollock,” Hirshfield speculated. “You could end up in anaphylactic shock.”

There is a patchwork of laws and U.S. agencies that cover seafood and seafood labeling and inspection, Hirshfield said, but it “looks like the FDA has the primary responsibility.” Oceana would like the Food and Drug Administration to do a few things: It wants the agency to implement a tracking system for fish, like the one in the European Union, which can trace seafood back to the original source. The nonprofit believes that the new Food Safety Modernization Act, which requires tracking systems for high-risk foods, practically demands one for seafood. The traceback system should be supplemented with periodic DNA testing to make sure suppliers are labeling fish correctly.

But Oceana would also like stepped-up enforcement of the Food Allergen Labeling and Consumer Protection Act of 2004, which requires that suppliers correctly identify the species of fish for sale.

Doug Karas, a spokesman for the FDA, said that Oceana had not yet contacted the agency about its wants, but noted that the FDA is already waist-deep into new systems that will help cut down on seafood fraud.

The FDA has been working with researchers, Karas wrote via e-mail, “to validate a DNA based method to identify seafood. This method is based on a technique known as ‘DNA Barcoding’ that was first popularized by the research group at the University of Guelph and is the basis for the ‘Barcode of Life’ initiative which is attempting to generate DNA barcodes for all eukaryotic life on the planet.”

As part of this initiative, the FDA is creating a DNA seafood library at the Smithsonian Natural History Museum; these sequences, Karas allowed, will eventually be made public for anyone using the same DNA testing to help identify potentially mislabeled species.

Karas said the DNA Barcoding-based method is already in use at the FDA and has led to an alert list of companies with sketchy histories of mislabeling fish. The companies on the list must prove their fish are what they say they are, Karas noted, before authorities will allow the seafood into the United States. This pilot program will soon stretch out across the country.

“The FDA has now purchased the sequencing equipment for five FDA field laboratories and we have recently conducted training for analysts in each of these labs,” Karas wrote. “After final proficiency testing on the equipment we will be able to use this method on a routine basis in the field. That should happen by the end of 2011.”

What’s more, Karas added, the FDA bases its import testing on risk assessment. To better assess the risk of imported seafood, the agency has developed what it calls the Predict screening system, which is already covering about 50 percent of imports to the United States.

Predict “uses a variety of assessments to rank import shipments according to risk,” Karas wrote. “It considers everything from whether a product is intrinsically risky to information we have acquired from previous sample analysis, field examinations, or inspections of shippers or producers and information about the regulatory system under which the product was produced. We can even add information on factors such as floods, hot weather, or market conditions that suggest whether a particular shipment is at risk of being contaminated, spoiled, or otherwise defective. These and other factors are weighed to give a risk score in relation to other products being offered for importation. This score, along with FDA’s expertise, will allow FDA field staff to target shipments that pose the highest risk to the public health.”