Scientists Score Ocean Health 60 out of 100 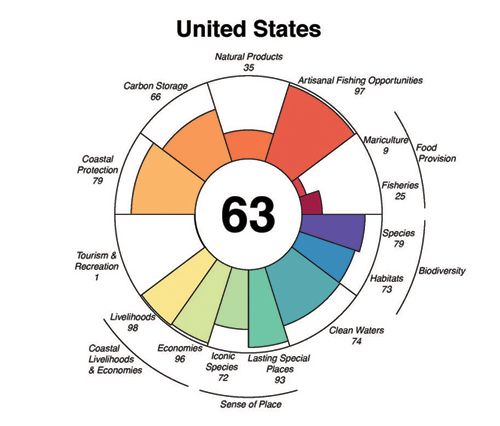 STANFORD / UC SANTA BARBARA (US) — Scientists have assessed the state of the ocean and its ecosystems, and the global average is 60 out of 100.

If thought of as a school report card, 60 out of 100 looks like a failing grade, but that’s not quite how the assessment should be read.

“It’s better to think of it like a stock portfolio,” says Stanford University’s Larry Crowder, the science director at the Center for Ocean Solutions and a member of the international working group that produced the report.

“We evaluated 10 public goals for each country. Some are doing really well for biodiversity, but not so well for food provision. Or some are doing really well for tourism, but poorly at protecting iconic species,” says Crowder, a professor of biology. “The Ocean Health Index is an aggregate of those scores. It’s a device to help us think about the ocean in a more integrated way.”

“Is the score far from perfect with ample room for improvement, or more than half way to perfect with plenty of reason to applaud success? I think it’s both,” says lead author Ben Halpern, an ecologist at University of California, Santa Barbara. “What the Index does is help us separate our gut feelings about good and bad from the measurement of what’s happening.”

The study appears August 15 in the journal Nature.

The scores don’t necessarily represent failure, but are a reflection of the current state of ocean health. For example, the United States scored slightly above average (63), but rated relatively low on aquaculture and sustainable fishing.

“The good news for fisheries in the United States is that although the stocks are reasonably depleted, trends in recent legislation have us on a track of rebuilding those stocks,” Crowder says. “We think that fisheries should be getting better, based on actions we’ve already taken.”

There is no one global fix-all. The hope is that each country’s ocean managers will look at the assessment and figure out the best way to improve their individual scores. A small Pacific island can improve fishing practices or the quality of its reefs, for example, but, because of its size, would have difficulty making a major impact on climate change provisions.

A critical element of the Ocean Health Index is that it fully includes humans as species that act on the ecosystem, but are also sustained by it. “The fact is, we live in a world with 7 billion plus people,” Crowder says. “A healthy ecosystem has to maintain economies.”

“The best condition for fisheries is not not fishing, but practicing sustainable fishing and providing those benefits to the fishing community,” Crowder says.

“We need strong policy and action on that policy, but also to engage the fishing communities and say, ‘We’re interested in the sustainability of fish, but also of you and your livelihoods. If you fish more sustainably today, you’ll benefit from it tomorrow.’”

The index could be updated every year, but because of the time and effort that would require, and the fact that some indicators take decades to show a response, Crowder thinks it might be better to issue a new index every five years.