Posted by amir on Tuesday, 24 July 2012 in Earth Violators 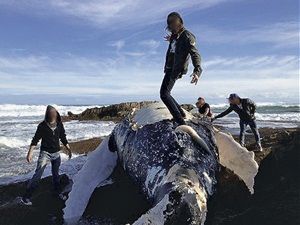 PEOPLE are being warned to keep away from the dead whale washed up near Warrnambool's Thunder Point after callous photographs appeared on a social networking site.

One posted on Facebook yesterday shows a group of people touching the male humpback as one man stands on top of it in a surfing pose.

A woman also contacted The Standard to complain about other Facebook photos which show people touching the whale’s genitals.

The Department of Sustainability and Environment (DSE) yesterday warned that people who approached, tampered with or took any part of the carcass faced severe penalties of up to $32,000 and prison sentences. Senior biodiversity officer Mandy Watson said under the Wildlife Act, it was illegal to interfere with a whale, whether dead or alive or to take parts from a dead whale.

“It is also an offence to approach within 300 metres,” Ms Watson said.

Ms Watson said the whale carcass was resting upside down on a rock ledge adjacent to the open ocean.

“Due to its current precarious position and poor access to the area the whale cannot be removed in the short term.

“The slippery carcass weighs approximately 40 tonnes and is very unstable as it rolls around with the waves.”

Ms Watson said DSE wanted people to stay away from the area to avoid breaking the law and for their own health and safety, with the carcass likely to swell and burst open.

“Whale carcasses attract large sharks and a decomposing carcass is a health risk.

“Decomposition of the whale will release oil and fluids into the ocean which could attract very large sharks.

“DSE strongly advises swimmers and surfers to stay well clear of the area.”

The 12-metre whale washed up at Eagle Rock and was discovered by a walker on Monday morning. It appears to have died at sea several days ago.