Posted by plantitfilm on Tuesday, 22 November 2011 in Wildlife Conservation 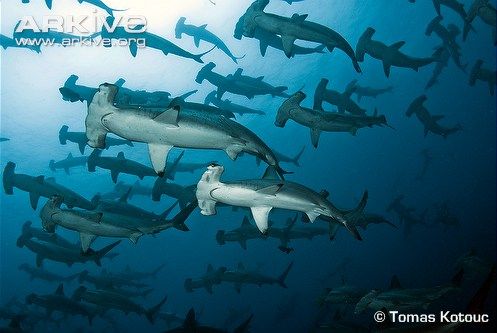 This shark's oddly shaped head is thought to be a mechanism to spread out its highly specialised sense organs, which amongst other things help it to detect electrical currents created by its prey. A useful skill to have when you have an entire ocean to scan for food!

Where am I found?

The wide-ranging scalloped hammerhead occurs right the way around the world, in warm temperate and tropical waters. It can be found in the Atlantic, Indian and Pacific Oceans, and also possibly the Mediterranean Sea. It swims at depths of 0 and 275 metres and regularly enters bays and estuaries.

What do I eat?

Adult scalloped hammerheads feed on a range of ocean critters including fish, squid, lobsters, crabs, shrimps, rays and even other sharks! The teeth of the scalloped hammerhead are best suited to seizing prey that can be swallowed whole, rather than ripping into larger prey.

How do I live?

A strange-looking creature, the strange hammer-shaped head is thought to be a mechanism to maximise the area of the sensory organs that detect electric currents, chemicals in the water, and temperature changes. Female scalloped hammerheads gather in impressively large schools around underwater mountains known as seamounts, where they perform a wide range of poorly-understood behaviours. These aggregations are thought to be a result of many sharks, particularly younger females, seeking refuge in a safe place near a rich food supply.

During the 9 to 10 month gestation, the eggs of the scalloped hammerhead hatch inside the body of the female. They are then nourished by a yolk sac until the female gives birth to between 15 and 31 live young in shallow waters during the summer.