Posted by ep-admin on Thursday, 06 September 2012 in Climate Change

A Letter to Your Grandchildren 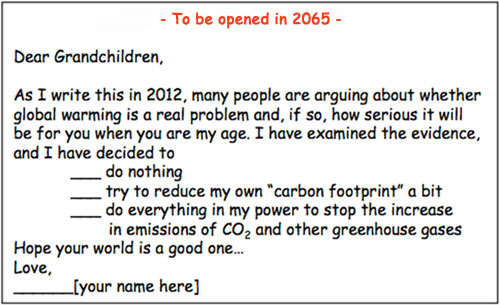 The summer of 2012 has been one of weather extremes around the world, with a huge toll on lives, property, and the economy. Polls show that, as a result, there has been a significant increase in the percentage of the public that “believes” in global warming. But a single year of weather cannot by itself speak to long-term trends, and “belief” should not play any role in science. So how can you decide whether global warming is really a problem that demands action? The answer is that you must examine the evidence clearly and logically, and without allowing your attention to be diverted by arguments that rely on opinion rather than evidence.

As someone who has spent a career teaching science, I can tell you that many scientific topics are subtle and complex, and can take years of study to understand. Fortunately, global warming is not one of those. In fact, it is based on science that is so simple that the main point can be reduced to a three-step deductive argument:

Fact 1: Carbon dioxide traps heat in the atmosphere. This fact was first measured in the laboratory more than 150 years ago, and is necessary to explain why Earth is warm enough for life to begin with, as well as to explaining the temperatures of all other planets in our solar system. Note that there is no scientific dispute about this fact whatsoever. 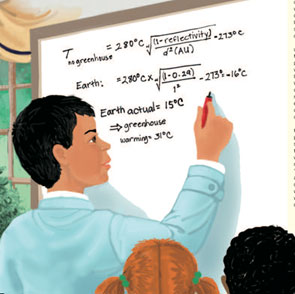 This illustration, from the author's children's book The Wizard Who Saved the World (Big Kid Science 2012), shows the main character (Diego) doing an actual calculation for Earth's temperature in the absence of greenhouse warming, from which we conclude that Earth is warm enough for life only because of the greenhouse effect caused by carbon dioxide and other greenhouse gases.

Fact 2: Human activity is adding carbon dioxide to Earth's atmosphere. While the carbon dioxide concentration varies naturally over long periods of time, measurements show that it had not risen above about 290 ppm (parts per million) for at least the past 800,000 years before the industrial revolution, but it is now nearing 400 ppm. In fact, the carbon dioxide concentration today is about 40% higher than it was at the time of the American Revolution, and on track to be 100% higher (a doubling) by the time your grandchildren reach your age. Again, there is absolutely no scientific dispute about the measured rise in the carbon dioxide concentration, which is based on direct and ongoing measurements that have been made since the late 1950s and is traced back 800,000 years through studies of ice cores. (In case you are wondering how we can be sure that the rise in carbon dioxide is due to us rather than to natural causes, the answer comes from isotopic analysis of atmospheric carbon dioxide: Carbon comes in more than one form [isotope], and the isotope ratio is slightly different in fossil fuels than from other carbon sources. Isotopic analysis shows that the added carbon dioxide in the atmosphere is attributable to the burning of fossil fuels.) 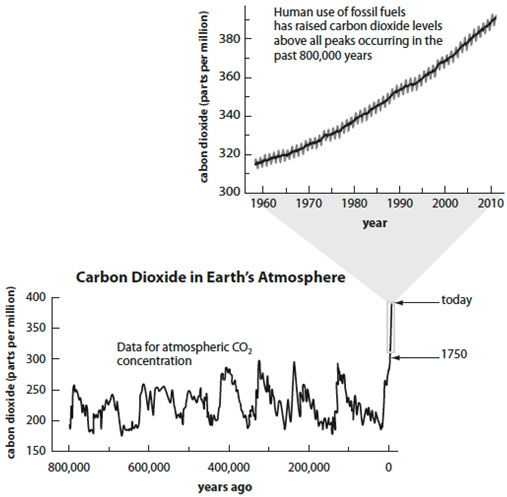 This figure is taken from the author's book Math for Life (Roberts & Co 2012). Data for the 800,000 year record come from the European Project for Ice Coring in Antarctica and data since the 1950s are from the National Oceanic and Atmospheric Administration.

Conclusion: Clearly, if carbon dioxide traps heat and we are adding more of it, we should expect global warming to occur. The only possible way around this conclusion would be if there were some unidentified feedback that could offset the expected warming, but the data show clearly that the world is indeed warming much as expected. Globally, for example, we see a clear warming trend over the past century, and the 11 full years since the turn of the millennium have been 11 of the 12 hottest years on record (and 2012 may end up beating them all). This warming means more total energy in the atmosphere and oceans, which explains why we see more frequent and severe weather extremes on a local level.

For anyone who is unsure about the issue of global warming, I urge you to study the above argument very carefully. As you will see, this is not a difficult scientific issue, and there is no room for any reasonable scientific doubt. Moreover, when you consider the consequences that we already see when the carbon dioxide concentration is up "only" 40% from its pre-industrial level, imagine what your grandchildren will face if we allow the level to continue its rapid rise, in which case it will be double the pre-industrial value by the time they are your age, and closing in on triple the pre-industrial value by the time their own grandchildren reach your age. While it's difficult to predict the precise consequences, it is hard to make a case that they would be anything less than catastrophic.

All of this explains why surveys show that upwards of 97% of all climate scientists agree that global warming is a serious problem demanding immediate and significant action. As to the small remaining % — well, scientists like to argue (it's a key part of our jobs!), and some people just never want to give up. For example, you can still find some so-called scientists who dispute that smoking causes cancer, but I wouldn't recommend that you take up smoking on that basis. It's the same with global warming. What will you say to your grandchildren?

Note: Despite the fact that there is no reasonable scientific doubt about either the reality or danger of global warming, you will still run into people who will try to snow you with objections that may at first sound plausible. When that occurs, I recommend visiting the "Skeptical Science" website, which has collected and debunked these objections at www.skepticalscience.com/argument.php.

Before I sign off, I thought it would be worthwhile to start a little collection of statements made by "global warming skeptics" that are so silly that you don't even need sophisticated science to see what is wrong with them. For this first post, I've chosen a statement from a letter written by some of the most prominent voices among the small percentage of scientists who dispute the danger of global warming.

Statement: "In fact, CO2 levels are below the optimum levels for most plants, and there are persuasive arguments that the mild warming and increased agricultural yields from doubling CO2 will be an overall benefit for humanity." — from a Letter to the Editor in the Wall Street Journal (8/12/12) signed by Richard W. Cohen, William Happer, and Richard S. Lindzen

Why it's so "silly": Given that CO2 levels today are significantly higher than they have been for any time in at least the past 800,000 years (see Fact 2 above), the claim that today's levels are "below the optimum" for most plants would imply that most plants have not been able grow optimally during these past 800,000 years. This makes no scientific sense; after all, evolution tends to ensure that species are well adapted to their environments, and 800,000 years is a long enough period of time that plants (and other species) should have adapted to the actual CO2 levels, not to some hypothetical higher levels. While it's possible that some plants might grow better in a laboratory with more carbon dioxide, the global ecosystem certainly can't be expected to do better with sudden and dramatic changes to the environment that are occurring on a time scale too fast for evolution to allow them to adapt. I cannot fathom where these well-credentialed scientists could have come up with their claim, but I definitely have to classify it as a "silly statement."

Finally, I'd like to thank everyone at Earth Protect for giving me the opportunity to blog here. I hope you enjoy the posts.