Posted by GreenDog on Tuesday, 10 September 2013 in Climate Change

Human history becomes more and more a race between education and catastrophe.
- H.G. Wells, The Outline of History, 1920

There may be no better illustration of the sentiment in the H.G. Wells quotation than that which we find in the issue of climate change, aka global warming. The evidence for global warming is overwhelming and incontrovertible, its consequences are already being felt in wildfires, extreme weather events, and ocean acidification, and its future consequences could be far worse for our children and grandchildren. These facts make it critical that we teach school children about the issue, but there is a lot of debate about how best to do that. As a scientist, educator, and author of a popular children’s book that focuses on this topic (The Wizard Who Saved the World), I’ll offer a few hints that guide my own presentations to children:

Hint 1: Maintain a three-pronged focus on education, perspective, and inspiration. We usually think of the goal of science education as getting students to understand science, but I believe that success in this goal can be achieved only if we simultaneously link the science content to the way that it can change our perspective (on ourselves or our planet) and inspire us to make the world a better place. We should therefore focus on “education, perspective, and inspiration” in all science teaching, but here I’ll give the specific example of how this idea applies to teaching about global warming:

Hint 3: Keep the scientific focus on “how we know.” The way that science is generally presented in school has been rightfully criticized as being too focused on facts and memorization and insufficiently focused on helping students understand how we arrive at scientific knowledge. While this is a problem that should be addressed for all science teaching, it is particularly acute for the science of global warming, because of all the misinformation spread by the so-called skeptics. If we simply teach the facts about global warming, then it’s just our words against theirs. But if we show how we know what we know, then people can see for themselves that the scientific case is unassailable. In particular, no matter how deeply you go into the math and science of global warming, you should always remind your audience that the basic scientific case starts with two simple facts that lead directly to one simple conclusion: 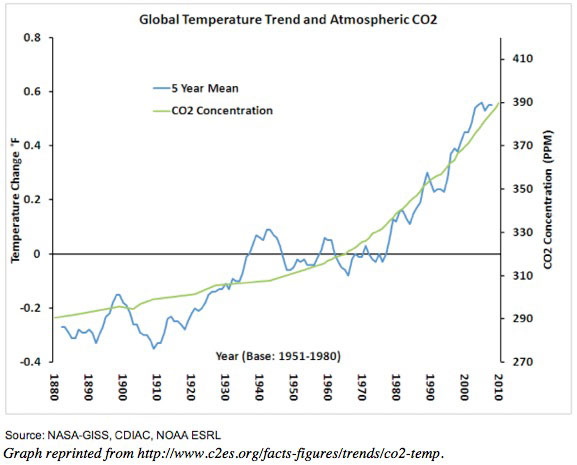 Once students understand this basic case and the evidence behind it, the rest is essentially details, albeit important ones such as the way we can use past geological data and climate models to try to predict how much and how fast the climate will change.

Hint 4: Adapt to grade and course level. My final hint concerns the fact that this topic is so important that we should be revisiting it with students every year, with increasing levels of sophistication as students get older. A few broad suggestions by grade level:

In closing, please keep in mind that the above set of hints is a very short list based on my personal views about teaching. I hope it will be of use to some of you, but be sure to consult other sources as well as you go out to teach children about climate science and global warming.

One of the simplest ways to demonstrate the fact that carbon dioxide really is a major factor in planetary temperatures is to show students how we model the temperatures of the rocky planets of our solar system. It turns out to be remarkably easy (at least for students with high school level math) to calculate the “no greenhouse” temperature of a planet, meaning the temperature that we expect for the planet in the absence of greenhouse warming by carbon dioxide and other greenhouse gases. Below, I’ve pasted two excerpts from my college astronomy textbook:

1.A  box explaining the calculation of “no greenhouse” temperatures.

The bottom line is very simple: The “no greenhouse” temperatures agree with the actual temperatures only for worlds without greenhouse gases, which means that other worlds are indeed being made warmer by these gases. Notice in particular that Earth is 31°C (about 56°F) warmer than its “no greenhouse” temperature, which means our planet would be frozen over without the greenhouse effect, while Venus presents the far more extreme case of 510°C (about 920°F) of greenhouse warming. That’s why I like to say that while the greenhouse effect is a very good thing for life on Earth, Venus is proof that it’s possible to have too much of a good thing.

Both excerpts below are from The Cosmic Perspective, 7th edition, by Bennett, Donahue, Schneider, and Voit (Pearson Education, 2014) 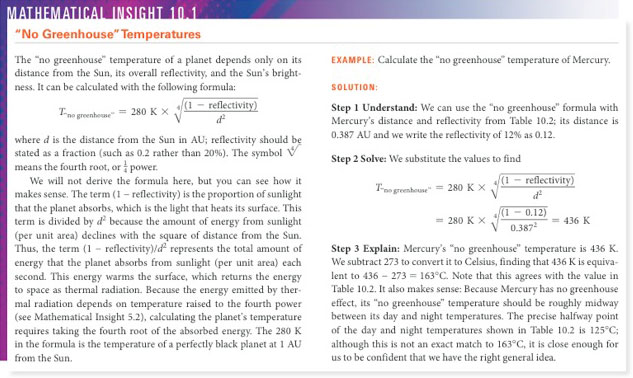