Posted by Tiny on Monday, 09 September 2013 in Earth Violators 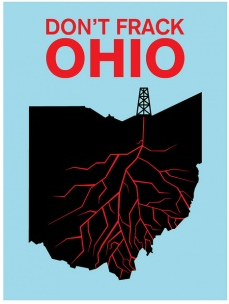 What could make a former Marine, retired cop, and self-described "ultra-conservative" oppose fracking in his home state of Ohio? At a diner off of Route 22 near Steubenville, OH, Ed Hashberger had the answer. Dressed in a red polo shirt emblazoned with the U.S. Marine Corps logo and carrying a Marine Corps notebook, Hashberger first described his bona fides.

He served three years in Panama. He recited half a dozen close relatives who served in World War II, the Vietnam War, Afghanistan, and Iraq. His son was badly injured from an improvised explosive device (IED) in Afghanistan and remains confined to a wheel chair as a result.

Hashberger is also a lifelong Republican. He campaigned on behalf of numerous Republican politicians, including both Bush presidents and Ohio Governor John Kasich. "You can look me up. There is probably nobody more conservative than me. I could be Sean Hannity's brother, that's how conservative I am," he said. He was initially excited when oil and gas companies approached him about leasing his land for drilling. "I was one of these 'drill baby drill' people. Couldn’t wait."

That all changed when he asked a Chesapeake Energy Corporation official at a public meeting what the company would do if landowners did not want to lease their land to natural gas companies, he remembers the official saying: "Simple. We'll take it from them anyways." That remarkably candid and cavalier response from the gas industry opened Hashberger's eyes and he has spent the last two years investigating landowner rights, the environmental consequences of hydraulic fracturing, and the ways in which every level of government has bent over backwards to appease the oil and gas industry.

Hashberger believes that the values — life, liberty, and the pursuit of happiness — for which he and his family have sacrificed are being trampled on by oil and gas companies. "The state of Ohio has done everything it can possibly do to make it easy for oil and gas companies to do business."