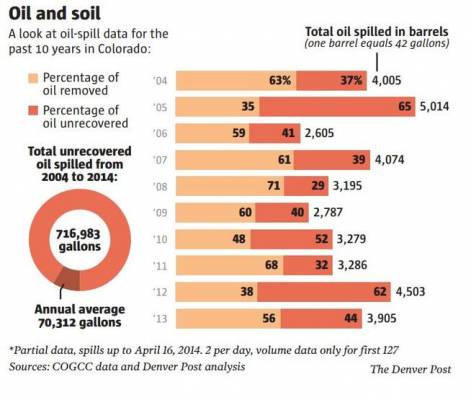 Colorado's intensifying oil and gas boom is taking a toll on soil — 200 gallons spilled per day seeping into once-fertile ground — that experts say could be ruinous.

The state's approach has been to try to compel companies to excavate and haul the worst muck to landfills.

But with support from state regulators, oil companies increasingly are proposing to clean contaminated soil on site using mixing machinery and microbes. This may be cheaper for the industry — and could save and restore soil.

But it is not proven.

"I'm comfortable with it. It is another example of innovation and opportunity by the oil and gas and service industries," Colorado Oil and Gas Conservation Commission director Matt Lepore said. "The whole point is that it is safe, that the harm to the environment has been minimized."

At least 716,982 gallons (45 percent) of the petroleum chemicals spilled during the past decade have stayed in the ground after initial cleanup — contaminating soil, sometimes spreading into groundwater, a Denver Post analysis of COGCC data found.

That's about one gallon of toxic liquid every eight minutes penetrating soil. In addition, drillers churn up 135 to 500 tons of dirt with every new well, some of it soaked with hydrocarbons and laced with potentially toxic minerals and salts. And heavy trucks crush soil, suffocating the delicate subsurface ecosystems that traditionally made Colorado's Front Range suitable for farming.

The overall impact of the oil and gas boom "is like a death sentence for soil," said Eugene Kelly, chief of soil and crop science at Colorado State University.

"We need to be very mindful of the way we're using soil. It could be the next limiting component when we talk about feeding the planet and having a sustainable lifestyle — because all the good stuff is gone and soil is being degraded," Kelly said.

"Some day the fossil fuels will be gone. Is our soil going to be healthy?"

No federal or state agency has assessed the impact of the oil and gas boom on soil and potential harm from cancer-causing benzene and other chemicals.

Drilling operations are expanding rapidly with roughly 3,000 new wells each year, adding to the nearly 52,000 active wells statewide. Companies drill the most in agricultural areas northeast of Denver.

The number of spills reported by companies reached a 10-year peak of 578 last year (43 related to the September floods), contaminating an estimated 173,400 tons of topsoil, according to the COGCC data, which come from reports companies are required to file.

While energy companies responsible for spills recover much of the liquid hydrocarbons during cleanups, an analysis of the data shows that roughly 45 percent stays in soil.

State data also show that 12.3 percent of the past 1,000 spills (since June 24, 2012) already had contaminated groundwater before companies began cleanup.

Beyond spill contamination of soil, the drilling of new wells unearths an estimated 652,500 tons a year of the sludgelike drill cuttings.

COGCC regulators, charged with promoting extraction of oil and gas while protecting people and the environment, point to a rule requiring excavation of spill-contaminated soil and safe disposal at landfills.

State regulators say they encourage companies to use closed-loop systems that don't require waste pits, which are a source of soil and groundwater contamination.

And when companies spread drill cuttings on leased fields instead of hauling to landfills, the regulators require testing by independent contractors to verify that contaminated soil and drill cuttings have met the 500 ppm standard.

These so-called "land applications" of drill cuttings have been approved at 55 locations, 51 of them northeast of Denver in Weld County, officials said. Contact with the air speeds breakdown of benzene and other chemicals — so that dirt safely can be reused as backfill at drill sites.

When spills contaminate soil — spills now happen at the rate of 1.5 per day — state rules require companies to specify how much soil is excavated and hauled to landfills. To make sure disposal gets done properly, inspectors check trucking manifests to verify reported volumes, said John Axelson, COGCC environmental supervisor for eastern Colorado.

The costs for the industry to haul and bury ruined soil can be heavy with fuel for trucks, labor and landfill fees.

Consider the volumes involved after the March 2103 Parachute Creek spill in western Colorado, where cleanup still isn't done. The Williams and Bargath companies have recovered 11,800 gallons of liquid hydrocarbons, state officials said. They've excavated 2,275 tons of contaminated soil, hauling it for burial at the ECDC facility in Utah.

The idea is that spill-tainted soil and drilling sludge that otherwise would be buried in landfills could be cleaned on-site and restored to a condition that meets the state health standards.

COGCC officials say they see potential in emerging treatment methods that harness microorganisms and dirt-mixing machinery. The aim is to save soil and clean it to a condition where plants could grow.

Anadarko and Colorado Oil and Gas Association officials could not cite an example of completed on-site treatment where once-contaminated soil now grows crops.

Anadarko still disposes of an unspecified amount of degraded soil in landfills.

Northeast of metro Denver, the Johnstown-based company Symmetry is pioneering soil-saving systems, using dirt-mixing machinery, absorbent additives and microbes that eat hydrocarbons, emitting water and carbon dioxide. The microbes are mixed into contaminated soil in a process that lasts three to six months.

"With central disposal in landfills, you're just moving the problem from the well site to a landfill," Nelson said. "Our alternative will transform what once was a contaminated waste stream to a viable soil. Public health risk is diminished. Groundwater safety is increased. Trucking is overwhelmingly reduced, along with the emissions from trucks."

Symmetry officials said their clients were unwilling to allow a visit to testing sites where soil and drilling sludge are being cleaned. It was unclear whether the emerging bio-remediation systems are at work and effective.

CSU scientists said on-site treatment with microbes isn't proven. Nobody knows how healthy treated soil may be after spreading it on fields, or after mixing it with various natural or introduced microbes, said Diana Wall, founding director of CSU's School of Global Environmental Sustainability.

"You turn it upside down, you lost the organic matter you had to begin with," Wall said.

But scientists saw promise in cleaning ruined soil — rather than burying it in landfills.

Much depends on what chemicals were spilled, how clean soil needs to be, and whether formerly toxic soil would be used to grow native grasses favored by wildlife or for producing food, said CSU natural resources professor Mark Paschke, who has studied efforts to revegetate oil and gas well pads.

"Weeds come in after. That's a big part of the challenge," Paschke said. And oil and gas companies only recently began to disclose the chemicals they use.

"A lot of these sites are still producing and will be for years," Paschke said. "What happens after that is something we really don't know."