Posted by thatsenough on Saturday, 15 March 2014 in Fossil Fuels 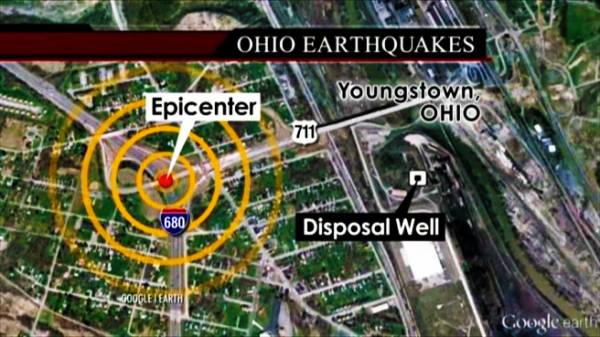 Ohio authorities shut down a hydraulic fracturing, or fracking, natural gas operation in Mahoning County on Monday after two earthquakes were felt in the area, near the Pennsylvania border, local newspapers and broadcasters reported.

The quakes registered magnitudes of 3.0 and 2.6, the U.S. Geological Survey’s National Earthquake Information Center said on its website.

Two smaller earthquakes were also reported later in the day.

The Ohio Department of Natural Resources (ODNR) halted operations of Texas-based Hilcorp Energy — which conducts fracking in the area — while experts from the department analyze data from the earthquakes, The Columbus Dispatch said, citing a statement it received from the ODNR.

"Out of an abundance of caution, we notified the only oil and gas operator in the area and ordered them to halt all operations until further assessment can take place,” the department was quoted as saying.

There were no immediate reports of injury or damage.

The magnitude 3.0 quake at about 2:26 a.m. was strong enough to wake up some residents in Poland Township, according to local NBC affiliate WFMJ. Reports said the smaller quake followed at 11:44 a.m.

The use of fracking — a gas-extraction process in which sand, water and chemicals are pumped into the ground to release trapped fuel deposits — has increased significantly in the United States over the past decade. Five years ago, the U.S. produced 5 million barrels of oil per day; today, it's 7.4 million, due largely to fracking.

Supporters of the process say it creates jobs and spurs the economy, while critics say that its development is largely unregulated and that too little is known about pollution and health risks.

The process of drilling so-called injection wells to dispose of fracking wastewater has been blamed for some minor earthquakes, and activists said Monday they hope the latest quakes will lead Ohio officials to halt fracking operations conducted near fault lines.

Ohio already has regulations prohibiting the disposal of fracking wastewater in certain counties. In January 2012, the state halted the disposal of oil and gas waste disposal in injection wells within a five-mile radius of a well in Youngstown that was linked to a series of earthquakes in 2011.

Hilcorp has drilled seven wells at the site near Monday’s earthquakes, according to The Business Journal, a local newspaper.

The Columbus Dispatch cited the ODNR as saying all available information indicates the latest quakes are not connected to injection wells.

Alison Auciello, the Ohio organizer for environmental group Food and Water Watch, told Al Jazeera that the location and depth of the latest earthquakes’ epicenters are consistent with the particular drilling sites — meaning they may have been caused by the fracking operation itself rather than waste disposal.

Wilma Subra, an environmental consultant and veteran activist, told Al Jazeera that it is only a matter of time before fracking operations cause earthquakes. “When you put that much liquid under extreme pressure down into a shale formation, it leaks out of the shale formation and into an area where there is a fault, resulting in an earthquake,” she said.

Shale formations contain fine-grain sedimentary rock, which can be rich in oil and natural gas.

State officials should evaluate the data completely before allowing Hillcorp to continue fracking in the area, Subra said, adding that the officials should prohibit companies from conducting fracking operations near fault lines. “Before companies can be permitted to conduct fracking operations, states should require companies to assess how close they are to a fault line before granting them a permit,” she said. “Nothing in any of the state regulations require that now, but that may change with the Ohio earthquakes.”

But Auciello does not believe any amount of regulating will prevent earthquakes caused by fracking. “We need to stop risking our communities. Fracking should be banned, and we should instead be focusing on renewable energy sources,” she said.

Recent studies have also highlighted environmental and health risks believed to be associated with fracking operations.

A study by The Associated Press in January found that water pollution in four U.S. states was linked to oil and gas wells and concluded that pollution was more widespread than the industry admits. A December study by the University of Missouri showed that fracking fluids could disrupt human hormones and lead to infertility, cancer and other health problems.

The U.S. Environmental Protection Agency is conducting an in-depth study on the potential impact of fracking on water resources, the findings of which are expected to be released late this year.