Is Gulf Seafood Safe to Eat?

Now that the  largest accidental oil spill is history, many women are wondering if the region’s fish is safe to eat. Find out what experts are saying, which potential health risks remain and how to be a smart seafood shopper... 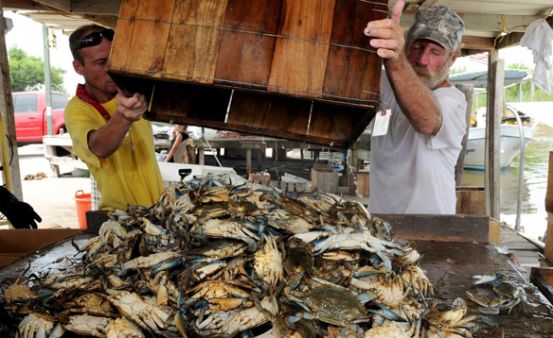 From April to July, BP’s Deepwater Horizon oil spill unleashed at least 172 million gallons of oil into the Gulf of Mexico, at its peak closing 88,522 square miles of the nation’s primary fishing grounds.

Now two months after the oil well has been capped, government officials – including President Obama – are telling consumers that the region’s fish makes fine eating.

Despite official assurances, consumers are wary. In a nationwide Associated Press survey conducted in August, more than half the respondents said they weren’t confident Gulf seafood was safe to eat.

So should you go ahead and order that shrimp cocktail? The answer depends on whom you ask.

The Food and Drug Administration (FDA), too, “feels confident in the safety of seafood coming from these waters,” says agency spokeswoman Meghan Scott. But, she adds: “We cannot give a blanket statement that all seafood from all Gulf waters is safe.”

Even if you ate fish contaminated with small amounts of oil, you’d probably just get an upset stomach and diarrhea, according to the University of Minnesota’s National Center for Food Protection and Defense. But exposed over time, some chemicals, including the dispersant used to clean up the oil, could cause cancer.

Here’s why the government insists that Gulf seafood is fine:

1. Gulf seafood is tested.
The Environmental Protection Agency (EPA), the National Oceanic and Atmospheric Administration (NOAA) and the FDA have agreements with five Gulf states to share information and testing responsibilities. Here’s how most fish is examined:It starts with a sensory test, also known as a “sniff test.” Highly trained FDA and NOAA “sensory assessors” smell as many as 36 fish samples per day, both raw and cooked. They can detect contaminants even down to one part per million. The FDA’s limit of contaminants for oysters, for example, is 66 parts per million.

Ten experts sniff and rate each sample, and their accuracy rate is about 80%, according to NOAA. If fish fail the sniff test, they don’t go to market and that section of the Gulf stays closed.

If they pass, a 200-gram mixture of all fish caught in a specific location is sent to regional labs and NOAA’s Northwest Fisheries Science Center in Seattle, where it’s tested for potentially cancer-causing polycyclic aromatic hydrocarbons (PAHs), the primary ingredients of oil and tar.

If the fish pass this detailed chemical test, the waters from that location reopen to fishing.

“The standards for reopening the fisheries are really conservative,” says Brian Gorman, a spokesman for NOAA’s National Marine Fisheries Service. “We’re ensuring to a very high degree that product won’t make it to the docks if it’s contaminated.”

Even so, Gulf fish will continue to be tested closely for months, according to NOAA.

“We’ve been doing this for 20-30 years, and know what we’re doing,” Gorman says. "We don’t expect any insurmountable problems.”

2. The entire Gulf wasn’t contaminated by the oil spill.
Most of the oil stayed near the Deepwater Horizon rig, which was closed to fishing.

3. Nature self-cleanses some of the oil.
Shrimp and "finfish” – those with fins, not shells – clear oil contamination out of their bodies within days, according to NOAA. Oysters and crabs may take several weeks.At the same time, the Gulf is loaded with microbes that “eat” oil, so what’s left in the water is disappearing. The U.S. Geological Survey announced recently that only 52.7 million gallons of crude remains, less than a third of what gushed from the broken well. The rest was removed by tankers, dissolved by chemical dispersants, or nature took care of it.

Hazards Remain
But just because the oil is diluted and out of sight “doesn’t necessarily mean [it’s] benign,” cautions NOAA chief Jane Lubchenco, Ph.D. The remaining oil could harm wildlife for years, she says.

University of Georgia scientists estimate that as much as 80% still lurks under the surface, and could settle on the sea floor.

If oil is buried where there’s little oxygen and doesn’t degrade, a disturbance could make it float back up and “exert its toxic effect on the ecosystem,” says Richard Condrey, Ph.D., an associate professor in Louisiana State University’s Department of Oceanography and Coastal Sciences.

Other scientists are worried about oil specks found in blue crab larvae. This could mean that oil is infiltrating the Gulf’s food chain and may have harmful long-term effects.

Bigger fish feed on crab larvae and are consumed by even bigger fish. Eventually, large species like tuna might ingest enough contaminants that they begin to die off.

“It’s important to separate [fish] ‘fit for consumption’ and [fish that are] ‘fit,’” says Harriet Perry, Ph.D., director of the University of Southern Mississippi’s Center for Fisheries Research and Development.

“Finding oil in the larvae raises concerns about the potential long-term ecological health of the species that feed on blue crabs,” she says. Dispersants: Another Toxin
There’s yet another potential problem: the chemical dispersants that BP used to break up the oil.

In August, the EPA released the results of a study saying that dispersants used in the Gulf are “no more toxic to aquatic life than oil alone.”

The FDA backed that statement, saying that “scientific data to date indicate that dispersants do not accumulate in seafood.”

But not all marine scientists agree. Some are concerned about the concentration of dispersant in the Gulf and how it might pass into seafood.

“If you ask, ‘Are dispersants safe in general, and what are their effects on organisms?’ – that hasn’t been well studied,” Blum says. “We do know they can be toxic.”

Still, he’s not bothered enough to stop eating Gulf shellfish. The perception of harm doesn’t match the evidence, he says. “You don’t have to be that worried.”

“You have to decide if you want to rely on the experts, and personally, I and my family have,” he says. “I ate three locally-cooked meals of Gulf shrimp, scallops, crab, everything!” he says. “I heard of no patients coming in with illness related to tainted seafood.”

Seafood Toxins: Not Just a Gulf Problem
For the most part, fish are one of the healthiest foods. They provide protein and nutrients such as vitamins A and D, iodine, selenium, phosphorus, potassium, iron and calcium. They’re low in saturated fat, and some are rich in omega-3 fatty acids, which help lower triglycerides and increase high-density lipoproteins (HDL or “good”) cholesterol.

But those benefits have to be weighed against other potential dangers. Much of the world’s seafood, whether from oceans, lakes or streams, may contain harmful chemicals.

Here are some of the toxins commonly found in seafood:

* Mercury occurs naturally in the environment and is dispersed through industrial pollution. It turns into methylmercury in the water, which is more toxic than other forms of mercury. Nearly all fish and shellfish contain traces of the toxic element, according to the FDA.

Most people face no harm from it, but pregnant women and children are at higher risk of mercury poisoning. Symptoms include hair loss, fatigue, depression, difficulty concentrating and headaches.

Generally speaking, large fish that are high on the food chain – such as tuna, swordfish and shark – have a greater chance of contamination from mercury and other pollutants. Your safest choices include wild salmon, sardines, catfish, shrimp, flounder, haddock, trout and hake, according to the FDA.

* Vibrio parahaemolyticus and Vibrio vulnificus are bacteria found in undercooked or raw seafood, such as shellfish or sushi. It causes vomiting, diarrhea, abdominal pain, blood-borne infection.

* Scombrotoxin, or histamine, is a bacterial food poisoning sometimes found in fish. It causes a rash, diarrhea, sweating, vomiting and other symptoms.
Some people face greater health risks from food-borne illnesses, according to the FDA. Those who shouldn’t eat raw fish (such as oysters or sushi) or partially cooked fish (such as seared tuna) include:

Safe Seafood Shopping
Here are FDA suggestions about how to choose fish wisely:

* Ask your grocer or fishmonger where the fish is from and whether it’s fresh.

* When shopping for shellfish, check for certification tags with the processor’s number. That indicates that the shellfish were harvested and processed according to national safety guidelines.

* Whole fish and fillets should have firm, shiny flesh; the gills should have no slime. Frozen fish lose some of their shine but are safe to eat.

* Do a “tap” test on live clams, oysters and mussels. They close when their shells are tapped. If they don’t close, don’t buy them.