Posted by EarthDude on Wednesday, 27 April 2011 in Climate Change

"What the heck went wrong?" That, apparently, is the question roiling the environmental community as it realizes that the fight against climate change has fizzled. 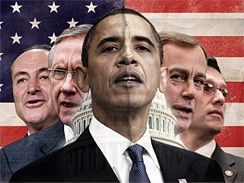 As Brad Plumer writes in the New Republic, everything was looking great in 2008 for a sweeping effort to make good on candidate Barack Obama's pledge to start turning back the rising oceans. The Democrats held Congress. Both John McCain and Obama had promised to push for capping carbon emissions. Corporations had gotten on board. Al Gore and "An Inconvenient Truth" had seemingly softened up the public to the point where it might go along with whatever a popular president promised.

"Instead, the climate push was ... a total flop," laments Plumer.

And, of course, Plumer's right, though not entirely for the reasons he claims.

Climate change is dead as a major political issue for the foreseeable future. Don't believe me? Check out Obama's remarks in his weekly radio address last weekend. It was all about energy policy, and yet not once did he talk about climate change.

In one sense that's odd, given that without global warming, his energy policy goes from merely misguided to outright bonkers. After all, if you wanted to create non-exportable jobs, wean America off foreign oil or pursue energy independence from the Middle East, absent any concerns about climate change or releasing CO2 into the atmosphere, you would unleash America's massive energy reserves in coal, gas and oil. According to the Congressional Research Service, hardly a mouthpiece for Big Oil, the U.S. has the largest energy resources of any country, Saudi Arabia and Russia included.

But in another sense it's not odd, because telling voters that they have to pay high gas prices in order to ineffectually fight climate change would be honest but incalculably dumb, politically. Recent polling shows that Americans care about the economy more — a lot more — than global warming. Skepticism about the existence of a problem or its scope has been rising in the U.S. and Europe. When a Pew poll in January asked voters what their biggest priorities were, climate changed ranked second to last. Only obesity was deemed less of a priority. (Don't tell Michelle Obama.)

Even Madison Avenue has noticed. The New York Times reports that increasingly budget-conscious consumers are no longer willing to shell out extra for self-described "green products." As a result, the number of new Earth-friendly products has plummeted. Meanwhile, Wal-Mart has largely abandoned its failed experiment with becoming a proletarian purveyor of green goods no one wants to buy.

Why has climate change lost its oomph? Plumer lays out some of the reasons, though he minimizes the damage greens have inflicted on their own credibility thanks to the 2009 Climategate email scandal and wildly overstated predictions. For instance, the United Nations predicted there would be 50 million "climate refugees" by 2010. Notably, the islands of the Caribbean would see massive population losses as denizens fled for their lives. Never happened. (Meanwhile, the U.N. Environment Program has removed the map of predicted devastation from its website.)

No wonder Obama constantly insists that switching to vastly more expensive and less-efficient energy sources will create jobs. No wonder he promises that if we all get on board the high-speed rail bandwagon, we'll win the future. No wonder he's trying to change the subject to as-of-yet-nonexistent gas station price gouging and allegedly outrageous subsidies for the oil industry.

Obama's claims are dubious at best. In supposedly pioneering China, high-speed rail has been a boondoggle of biblical proportions. Green jobs destroy more jobs than they create, and pay less. In Spain, Obama's favorite clean-energy innovator, one study found that 2.2 jobs were destroyed for every one that was created. Indeed, across Europe, massive investments in wind and solar simply haven't paid off.

One suspects that Obama would dearly love to drill a lot for more oil and gas, simply for the political windfall in jobs and economic growth. But after he flipped on offshore drilling, then flopped after the Gulf of Mexico oil spill, he cannot flip again without infuriating his base. So he brags about how much more drilling there is today, even though that's the result of policies already in the pipeline.

Obama and the greens are in an exquisite bind. Without economic recovery, Americans won't support Obama's "investments," but Obama's investments are a hindrance to recovery.

Jonah Goldberg is editor-at-large of National Review Online and a visiting fellow at the American Enterprise Institute.