Posted by plantitfilm on Thursday, 21 April 2011 in Environmental Heroes 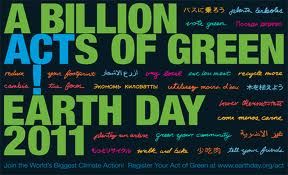 Earth Day is a reminder about the importance of environmental protection and sustainability. Most importantly, it reminds us that we can a make a difference when it comes to our planet.

The first Earth Day celebration was held in 1970 and it launched the modern  environmental movement with over 20 million Americans from all walks of life.

This movement prompted the passage of groundbreaking laws such as the Clean Air Act, Clean Water Act and Endangered Species Act.

This year’s theme is “A Billion Acts of Green” and the goal is to generate a billion acts of environmental service and advocacy before the global Earth Summit 2012 in Rio. Submit your act of green at act.earthday.org.